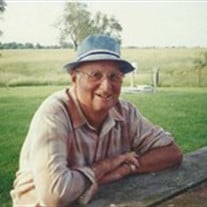 Albert J. Torbeck of Vandalia formerly of Shobonier passed away at 2:15am, Sunday, June 28, 2015 at his apartment at Brookstone Estates in Vandalia.  Services for Mr. Torbeck will be held at 10:00am, Wednesday, July 1, 2015 at Augsburg Immanuel Lutheran Church, Shobonier with Pastor Doug Meyer officiating.  Visitation will be held from 5:00-7:00pm, Tuesday, June 30, 2015 at Augsburg Immanuel Lutheran Church, Shobonier and 1 hour prior to services Wednesday at the church.  Burial will follow in Augsburg Immanuel Lutheran Church Cemetery, Shobonier.  Military Rites accorded at graveside by Crawford-Hale American Legion Post #95, Vandalia, IL and Brownstown VFW Post #9770.  Memorials may be made to Crawford-Hale American Legion Post # 95 or Augsburg Immanuel Lutheran Church Cemetery Fund. Albert Johann (John) Emil Torbeck was born April 2, 1919, near Gatch Lake, rural Vandalia, the son of Paul C. and Esther (Shukar) Torbeck.  He was baptized April 9, 1933 in Immanuel Lutheran Church at Shobonier.  He was a WWII veteran having served in the United States Army, where he attained the rank of Corporal.  On September 4, 1944 he married Ruth Bertram in Gainesville, TX.  After his discharge from the army, the couple resided in the Chicago area.  Their daughter Pamella was born October 13, 1960 in Evanston, IL.  Shortly thereafter, the family returned to the Fayette County area.  He was a member of the Crawford-Hale American Legion Post #95 and a long term member of Immanuel Lutheran Church, holding various offices including School Board President during his lifetime.  He remained deeply devoted to his faith until his death. Albert was a union Carpenter by trade.  He proudly maintained his union membership with the United Brotherhood of Carpenters Joiners of America for over 65 years.  He enjoyed fishing, quail and rabbit hunting, and spending time with his only grandchild, Taylor Parrish. Albert is survived by his daughter Pamella, son-in-law Greg Parrish, granddaughter Taylor Parrish all of Shobonier, sister Leota Matlock of Mt. Zion, sister-in-law Delores Torbeck of Mattoon, and numerous nieces and nephews.  He was preceded in death by his parents, wife Ruth on July 15, 1980, brothers Wallace and Delbert Torbeck, sisters-in-law Florence Grandt, Martha Rebbe, and Ruby Woolsey, brothers-in-law Harold Matlock and Harold Bertram, uncles Raymond, Ernest, and Clarence Torbeck, and his aunt Rose Bertram.

Albert J. Torbeck of Vandalia formerly of Shobonier passed away at 2:15am, Sunday, June 28, 2015 at his apartment at Brookstone Estates in Vandalia.  Services for Mr. Torbeck will be held at 10:00am, Wednesday, July 1, 2015 at Augsburg... View Obituary & Service Information

The family of Albert Torbeck created this Life Tributes page to make it easy to share your memories.

Albert J. Torbeck of Vandalia formerly of Shobonier passed away...