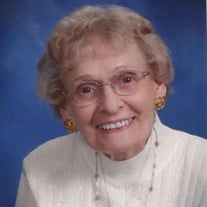 Alice Leona Eakin, 95, of Decatur, IL, formerly of Vandalia, passed away peacefully in the early morning hours of July 08, 2020. She was a resident at Fair Havens Senior Living Center at the time of her death, which was brought about by natural causes. A Funeral Service will be held at 11:00AM, Saturday, July 11, 2020 at the First United Methodist Church, Vandalia with Rev. Thomas Goodell officiating. Interment will follow in McInturff Cemetery, Vandalia. Visitation will be held one hour prior to the service from 10:00AM- 11:00AM, Saturday, July 11, 2020 at the church. In lieu of flowers, the family suggests that donations be made to the First United Methodist Church of Vandalia, Grace United Methodist Church of Decatur, or to a charity of the donor’s choosing. **It is recommended that the guidelines set forth by the Center for Disease Control and Illinois Department of Public Health as they relate to COVID-19 be followed. This includes but is not limited to face coverings and social distancing. Please be respectful of others** Alice was born in Terre Haute, Indiana, the daughter of Wilbur F. and Frances G. (Rasico) McClure. She was a graduate of Decatur High School, Brown’s Business College, and served her country during WWII as a civilian clerk/typist at Camp Van Dorn, Mississippi. Alice married Erlin Eakin in 1947 and from that union came five daughters—Ember (Jack) Davis, Annalee (Michael) Johnson, Sharon (Arlin) Larson, Gayle Eakin, and Marianne Stenger. All of the girls were born in Vandalia where they helped their parents on the family farm, located on Pittsburg Road. When not taking care of her family, Alice was involved in 4-H, the First United Methodist Church of Vandalia, and various neighborhood and community projects. After moving to Decatur for the first time in 1966, she worked for Roland and Company (later becoming Tabor Commodities), sold real estate, bowled, and was very active in the American Business Women’s Association. She was named Woman of the Year in 1983. Alice and Erlin returned to Vandalia in the early 1980s, where she once again threw herself into community life. She taught Sunday School, sold real estate, worked out of her home, welcomed grandchildren into her life and travelled to see her daughters and their families who live in other states. Alice’s last years were spent in Decatur to be close to her daughter who lives there, as well as the eldest daughter who lives in Monticello. She attended Grace United Methodist Church, worked as an auxiliary volunteer at St. Mary’s Hospital, and enjoyed playing cards, dominoes and working on puzzles with her family and friends. Alice was preceded in death by her parents; husband of over 50 years; brother, Marion Robert “Bob” McClure; and one son-in-law, Michael Davis. She leaves her five daughters, six grandchildren, and ten great-grandchildren to carry on her legacy. The family would like to thank the staff at Station #2 at Fair Havens for their loving care and concern for Alice. A gentle woman—she will be truly missed by all those who knew her.

Alice Leona Eakin, 95, of Decatur, IL, formerly of Vandalia, passed away peacefully in the early morning hours of July 08, 2020. She was a resident at Fair Havens Senior Living Center at the time of her death, which was brought about by natural... View Obituary & Service Information

The family of Alice Eakin created this Life Tributes page to make it easy to share your memories.

Send flowers to the Eakin family.