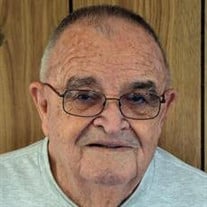 Billie Dean Brown, 92, of Vandalia, IL passed away at 2:04 PM, Tuesday, August 06, 2019 at Carle Foundation Hospital in Urbana. A Funeral Service will be held at 2:00 PM, Sunday, August 11, 2019 at Unity Baptist Church, Hwy 185, Vandalia. Interment will follow at Fairlawn Cemetery, Vandalia. Military Rites will be accorded at the graveside by the Crawford-Hale American Legion Post # 95, Vandalia & Brownstown VFW Post #9770. Visitation will be held from 5:00- 7:00 PM, Saturday, August 10, 2019 at Unity Baptist Church and one hour prior to services Sunday, August 11, 2019. Memorials may be made to Unity Baptist Church, Second Chance Animal Rescue, The Vandalia Lion’s Club, or VCHS Sports Boosters. Billie Dean Brown was born on August 15, 1926 in Vandalia, IL, the son of Rollie and Anna (Luster) Brown. Bill served in the United States Army during WWII. He then married Shirley M. Henry on April 24, 1948. After his service, Bill worked and retired as a manager for E. Blankenship & Co.; the evening of his retirement he began working as a funeral assistant for Hohlt & File Funeral Home, where he worked for nearly 30 years. He was a member of Unity Baptist Church, where he was a deacon; Crawford-Hale American Legion Post #95; and the Vandalia Lion’s Club. Bill was a Lion for 55 years, he served as the club treasurer for almost 25 years, was the club president from 1970-71, and served in every club office except secretary. Bill was extremely involved within the community and volunteered for Evergreen Outreach, Operation Outing, and as a scorekeeper for VCHS basketball and football games. We all knew how important Bill’s jobs and volunteering were to him but, if you truly knew Bill, you knew what was most important. He was married to the love of his life for 71 plus years, he loved his family with all his heart, he cherished our Lord and his church, and he loved the St. Louis Cardinals. He is survived by his wife, Shirley Brown and his three daughters, Brenda Jo Smith, Kim and husband Dean Bone, and Shella Gay Brown; all of Vandalia; grandchildren, Brent Smith and wife Julie, Jay Keppler and wife Ashlee, Kayci and husband Cody Goldsboro, and Shelby McCurdy; great-grandchildren, Krissy Smith, Maci Keppler, Sylvia Keppler, Nora Keppler, Rhyan Goldsboro, and Hadlee Goldsboro; and a great-great-grandson, Kamden Lewis. He was preceded in death by his parents; brothers, Lloyd Brown and Dennis Brown; and a sister, Edna Peterson.

The family of Billie D. Brown created this Life Tributes page to make it easy to share your memories.

Send flowers to the Brown family.