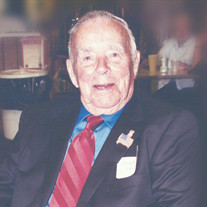 Oran Bradford “Brad” Elmore, 96, of Vandalia, IL passed away at 7:07 PM, Friday, November 09, 2018 at Fayette County Hospital. A Funeral Service will be held at 11:00 AM, Wednesday, November 14, 2018 at the Crawford-Hale American Legion Post #95, Vandalia with Rev. Terry Westerfield officiating. Interment will follow in Wilberton Cemetery, St. Peter. Military Rites will be accorded at the graveside by Crawford-Hale American Legion Post # 95 & Brownstown VFW Post #9770. Visitation will be held prior to services from 9:00-11:00 AM, Wednesday, November 14, 2018 at the American Legion. In lieu of flowers, memorials may be made to the Crawford-Hale American Legion Post #95. Oran Bradford Elmore was born on September 12, 1922 in Fiskburg, KY, the son of Glenn and Marie (Tongate) Elmore. He married Nellie Richards on September 2, 1948; she preceded in death on May 11, 2001. Together, they celebrated 52 years of marriage and raised two children. Brad was a United States Army Veteran serving in WWII; former sergeant of arms, in which he served many grieving military families; former superintendent of the sewer and water plant for the City of Vandalia; and also, a retired dispatcher. He was a life-time member of the Crawford-Hale American Legion Post #95, Vandalia, where he served as commander two times; member of the VFW Post #3862, Vandalia; AMVETS; Illinois Federation for Outdoor Resources; and the First United Methodist Church, Vandalia. He is survived by his daughter, Rebecca and husband, Ronnie Hourigan of Plymouth, IN; son, Robert Elmore of Vandalia; grandchildren, Jamie Elmore of Vandalia, Justin Elmore and wife, Natasha of Vandalia, Alisa and husband, Matt Kemmerer of Indianapolis, IN and Lynsey and husband, Bryan Hubbard of Indianapolis, IN; great-grandchildren, Egan McClary, Rylee Elmore, Joslyn Elmore, Malory Kemmerer, Andrew Kemmerer, Ayla Hubbard, Evie Hubbard, and Maxxton Hubbard; and a sister. He was preceded in death by his parents; wife; and three brothers.

The family of Brad Elmore created this Life Tributes page to make it easy to share your memories.

Send flowers to the Elmore family.