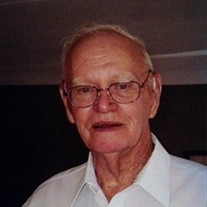 Charles Edward "Smokey" Burrus, 88, of Brownstown, passed away at 2:50pm, Monday, September 8, 2014 at Fayette County Hospital Long Term Care, Vandalia. A visitation will be held Thursday, September 11, 2014 from 5:00-7:00pm at Hohlt & File Funeral Home in Vandalia.  A private burial service will be held at a later date. Interment will be in Griffith Cemetery, Brownstown, IL.  Memorials may be made to Fayette County Hospital Long Term Care Activity Fund. Charles Edward "Smokey" Burrus was born May 15, 1926 in Brownstown, the son of Charles and Mary (Parks) Burrus.  He married Lois L. Youther on August 4, 1949 in Morganfield, KY; she preceded him in death March 19, 2013.  Smokey was a self employed farmer and carpenter, he was a member of the First Christian Church of Brownstown and former member of the Brownstown Volunteer Fire Department.  He was a diehard Chicago Cubs fan and had a green thumb when it came to gardening. He is survived by his daughters Lori D'Auben (husband Dan) of Naperville, Jody Smith (friend Ron Cable) of Vandalia, and Patti Burrus (friend Wes Miller) of Shobonier; grandchildren Joe, Jon and wife Kerri, Shaun and wife Stacey, Keri and husband Kurt, Sharee and fiancé Billy, and Craig; great grandchildren Amiee, Amber, Alex, Shelby, Ian, Dalton and Kaden. He was preceded in death by his parents, wife, infant daughter Sherri Burrus, three brothers and three sisters.

The family of Charles "Smokey" Burrus created this Life Tributes page to make it easy to share your memories.