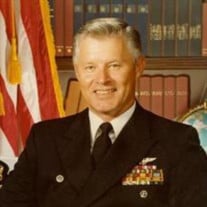 Charles Leroy Tinker, a son of Vandalia and a decorated Naval Aviator for more than 50 years, earned his permanent aviator wings on February 7, 2022. Born in Vandalia, Illinois in 1933 to Kemper Tinker and Imogene Hudson, he spent his childhood at the family farm as the fifth-generation owner of a 300-acre farm in Vandalia, which was deeded to the Tinker Family by President Martin Van Buren in 1840, as a land grant. The farm was designated as an historic family farm by The State of Illinois. He attended Overcup School for his elementary education, and then attended Brownstown High School, where he was a member of the school’s basketball team. Standing on the lawn of the farm as a very young man, he saw an airplane for the first time, and his destiny was set. He enjoyed a lengthy and varied career as a fighter pilot (primarily the F-8 Crusader), serving on Active Duty from December, 1954, to June, 1986. He served three combat tours in Vietnam, executing a total of 239 missions, all aboard the USS Oriskany. He earned a Bachelors degree from George Washington University, while concurrently assigned to the Pentagon, where he was then promoted to Commander and assumed Squadron command. He earned a number of Commendations, including Defense Superior Service Legion of Merit, Bronze Star, four Individual and 29 Strike Flight Air Medals, and two Navy Achievement Medals. He retired from active duty having earned the rank of Captain. After his retirement from aviation, he was honored to have been made a member of the Golden Eagles, a fraternity of extraordinary aviators. With his passing, he is now a Golden Eagle Emeritus. His family will miss his humor, and all of the fascinating stories he would tell his children and grandchildren about the history and people of our beloved farm. He was preceded in death by his son Charles Lee Tinker, Jr., in 2020, and Richard Kemper Tinker, in 2021. He is survived by the light and love of his life: his beloved wife Mitch, whom he married in 1956. He is also survived by his son Christopher and Daughter-in-Law Colleen, of Pensacola, Florida, and grandsons Charles M. Tinker, of Grand Rapids, Michigan; Connor C. Tinker, of Denver, Colorado; and Colin K. Tinker, of Denver, Colorado. In lieu of flowers, the family requests donations be made in his name to a charity of their choice. A visitation is planned for 1:00–2:00 p.m. on Saturday, February 19, 2022 at Hohlt & File Funeral Home, 204 N. 4th Street, Vandalia, IL, with a graveside service with full military honors to follow at 2:30 p.m. at Morton Cemetery in Vandalia. Following the interment there will be a reception at Overcup Baptist Church, RR 1, Vandalia, IL.

Charles Leroy Tinker, a son of Vandalia and a decorated Naval Aviator for more than 50 years, earned his permanent aviator wings on February 7, 2022. Born in Vandalia, Illinois in 1933 to Kemper Tinker and Imogene Hudson, he spent his childhood... View Obituary & Service Information

The family of Charles L. Tinker created this Life Tributes page to make it easy to share your memories.

Charles Leroy Tinker, a son of Vandalia and a decorated Naval...

Send flowers to the Tinker family.