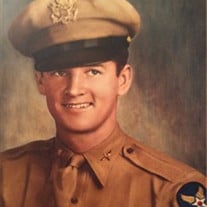 Dick Bresee, 95, of West Palm Beach, FL, formerly of Vandalia, died on Saturday, September 10, 2016.  Graveside services will be held at 2:30 p.m. on Saturday, September 17, 2016 at Fairlawn Cemetery in Vandalia.  Visitation will be from 1-2 p.m. Saturday, September 17, 2016 at Hohlt and File Funeral Home in Vandalia.  Dick was born in Chadron, Nebraska.   A self-professed "Nebraska farm boy," Dick received a chemical engineering degree from the University of Nebraska and was an instructor in engineering/physics at the University of Nebraska.   Dick was a recipient of the Bausch and Lomb Honorary Science Award and holder of several U.S. patents.   Starting out with Phillips Petroleum Company in 1948, Dick worked for Phillips for several years in sales, in addition to working on several research projects.   He then moved to Vandalia and purchased Densmore Sales and Service, a propane gas company, later becoming Your Comfort Heating Company, which he ran for 30-plus years until retiring and moving to sunny Florida. Dick was in the Nebraska National Guard.   He then joined the Air Force during WWII as a bombardier-navigator with the 14th Air Force, Flying Tigers, flying "The Hump" during the China-Burma-India theater with over 50-plus combat missions, achieving the Distinguished Flying Cross, Asiatic Pacific Service Ribbon with 2 Bronze Stars and the Air Medal. A very thoughtful and generous man and staunch supporter of education, Dick donated farmland to the Vandalia school district.   He loved farming and piddling on his land.   In addition to farming and "engineering" contraptions, thereby improving products for himself and friends until very recently, Dick was also an educator of sorts.   His brilliance, thoughtfulness, and humor will be missed.   Survivors include his children and several grandkids.

The family of Dick Bresee created this Life Tributes page to make it easy to share your memories.