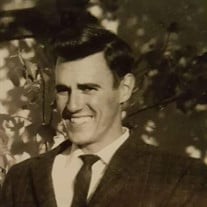 Donald Ray Frailey, 82, of Herrick, IL passed away at 11:51 AM, Friday, January 22, 2021 at HSHS St. Elizabeth’s Hospital, O’Fallon. A Graveside Service and Interment will be held at 10:00 AM, Wednesday, January 27, 2021 at Antioch Cemetery, Herrick with Rev. Fr. Scott Snider officiating. Military Rites will be accorded at the graveside by the Sarver-Guthrie American Legion Post #839, Herrick and the Ramsey American Legion Post #460. Memorials may be made to St. Joseph Catholic Church or Antioch Cemetery. Mr. Frailey was born on June 13, 1938 in Herrick, IL, the son of Rollie Edward and Alma Eula (Pope) Frailey. He married Mary Ellen Fisher on May 05, 1959; together they celebrated nearly 62 years of marriage. Don was a proud Veteran; serving in the United States Air Force. After his service, he was a salesman and eventually became a guard for Rohr Aircraft; he then later became a correctional officer for IDOC at the Vandalia Correctional Center. He was a member of the Sarver- Guthrie American Legion Post #839, Herrick and St. Joseph Catholic Church, Ramsey. Don had an avid love for the outdoors and enjoyed mushroom hunting; he was also a certified master gardener. He is survived by his wife, Mary Ellen Frailey of Herrick; son, William R. Frailey and wife, Mary of Noblesville, IN; daughters, Donna Rae Bigham of Pana, Brenda Mulle of McCall, ID, and Jennifer and husband Steve Lay of Ramsey; daughter-in-law, Ann Frailey of Fillmore; sisters, Lorraine Sager of Effingham, Barbara and husband William Sanders of Camilla, GA, and Karen and husband Johnnie Warner of Ramsey; 17 grandchildren; and 3 great-grandchildren. He was preceded in death by his parents; son, John Joseph Frailey; and sisters, Beulah Bearup and Georgia Berryman.

The family of Donald R Frailey created this Life Tributes page to make it easy to share your memories.

Send flowers to the Frailey family.