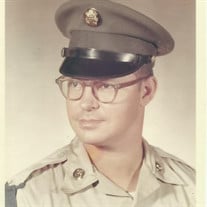 Retired SFC Donald Leslie Satterthwaite, Jr., 81, of Brownstown, IL passed away on March 10, 2018 at the Veteran’s Administration Community Living Center in Marion, after a short battle with kidney and lung cancer. A Funeral Service will be held at 10:00 AM, Friday, March 16, 2018 at Bethel Baptist Church, Vandalia with Dr. Ben Foxworth officiating. Interment will follow in Griffith Cemetery, Brownstown. Military Rites accorded at graveside by Crawford-Hale American Legion Post # 95. Visitation will be held from 6:00 PM- 8:00 PM, Thursday, March 15, 2018 at Bethel Baptist Church, Vandalia. Memorials may be made to the Veteran’s Administration Community Living Center in Marion; Fayette County Cancer Fund; or the Donor’s Choice. Don was born in Fayette County on January 19, 1937, and was the first born of Donald and Annetta (Gephart) Satterthwaite. Don grew up in Shafter Township and was a graduate of Vandalia High School class of 1954. He joined the Army to see the world and that he did; he served in Japan, Vietnam, Korea, and three stints in Germany, in addition to various posts in the U.S., including Hawaii. After over twenty years of service Don retired on the family farm in Brownstown. He then retired from seasonal work with the Farm Service. Don was a member of the Crawford-Hale American Legion Post #95, a lifetime member of the NRA and a supporter of many Veteran’s organizations. Don was preceded in death by his parents and grandparents; infant nephew and niece, Bobby and Beth Ann; his brother, John and John’s son, Sean; and brother-in-law, John Fox. He is survived by his siblings, Harry Satterthwaite (Miki), Bob Satterthwaite (Lynette), Loretta Satterthwaite (Bob Stamps), Margaret Satterthwaite, Susan Fox, and Becky Satterthwaite; 8 nieces and nephews and many great and great-greats. He will be missed by all.

Retired SFC Donald Leslie Satterthwaite, Jr., 81, of Brownstown, IL passed away on March 10, 2018 at the Veteran&#8217;s Administration Community Living Center in Marion, after a short battle with kidney and lung cancer. A Funeral Service will... View Obituary & Service Information

The family of Donald Satterthwaite Jr. created this Life Tributes page to make it easy to share your memories.

Send flowers to the Satterthwaite family.