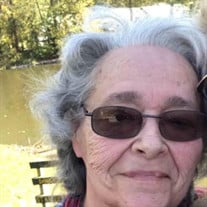 Doretha Jane “Dee” Jones, 73, of Vandalia, passed away at 3:30 AM, Friday, December 11, 2020 at SBL Fayette County Hospital. A Graveside Service will be held at 11:00am, Tuesday, December 15, 2020 at Fairlawn Cemetery, Vandalia with Rev. Pete LeDuc officiating. Memorials may be made to the family of Doretha Jones to help with funeral expenses. Online condolences can be expressed at www.hohltandfilefh.com Doretha Jane Siefert was born January 2, 1947, in Nokomis, IL, the daughter of Ray and Lola (Blades) Siefert. She married Louis Wayne Jones on December 18, 1964; together they shared 28 years of marriage before his passing on March 14, 1993. Dee worked in the healthcare field was also an in-home child care provider. She is survived by her daughters, Michelle Logsdon and Melinda Jones; grandchildren, Kimberly Logsdon and fiancé Dustin Tish, Kristina Logsdon and boyfriend Tanner Opfer, Lehela Jones, and Rylie Jones; brother, Melvin Blades and wife Ollie; and sister, Linda Halsey. She was preceded in death by her parents; husband; and son, Matt Allen Jones; five brothers; and four sisters.

The family of Doretha "Dee" Jones created this Life Tributes page to make it easy to share your memories.

Send flowers to the Jones family.