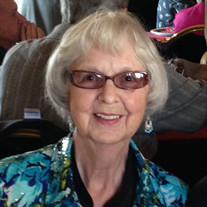 Eleanor Mae McNutt, 79, of Vandalia passed away at 10:55pm, Sunday, November 13, 2016 at St. John’s Hospital, Springfield. Per Eleanor’s wishes her body is being cremated and a Celebration of Life Party will be held from 6:00 PM – Midnight, Friday, November 18, 2016 at the Vandalia Moose Lodge. Memorial donations may be made to the Fayette County Hospital Activity Fund – Gazebo or to Evans Public Library. Eleanor was born May 26, 1937 in Chicago, the daughter of Henry and Mabel (Merrill) Wagner. She married Jimmy D. McNutt on June 25, 1956 in Chicago, he preceded in death October 11, 2015. Eleanor was an activity coordinator for Fayette County Hospital Long Term Care and Vandalia Rehabilitation Center. She participated in the Vandalia Bowling League, was an educator and activist helping hundreds of women and families with breastfeeding; she was an established seamstress and pianist, she was outgoing, never meeting a stranger. She is survived by her children, sons Dale McNutt of Vandalia, Jamie John McNutt of Carbondale, and Leland McNutt and wife Amanda of Vandalia, daughters Judy McNutt and wife Mary of Vandalia, and Lenora and husband Jim Murphy of Salem, brother James Wagner, sisters Gladys Kennelly, Dorothy Stech, and Irene Snyders, daughter-in-law Janice McNutt of Vandalia, and many grandchildren and great grandchildren, nieces and nephews. She was preceded in death by her parents, husband, son Dean McNutt, brothers Henry Wagner, Lawrence Wagner, and Edward Wagner, sister Melissa Stewart, grandson Joshua Allen McNutt

The family of Eleanor Mae McNutt created this Life Tributes page to make it easy to share your memories.

Send flowers to the McNutt family.