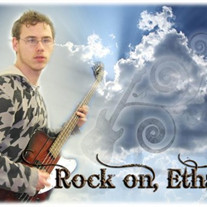 Ethan Crisman, 18, of Keyesport, IL died Tuesday, April 10, 2012 at 4:12 PM, at St. Louis Children's hospital. Funeral Service will be held at 10:30 AM, Tuesday, April 17, 2012 at the First Baptist Church of Vandalia, IL.  Burial will follow  in Evans Cemetery in rural Vandalia. Visitation will be held from 5-8 PM, Monday, April 16, 2012 at the First Baptist Church of Vandalia, IL and also from 9-10:30 AM, Tuesday, April 17, 2012 at the church prior to the funeral service.  Memorials may be made to the family of Ethan Crisman and will be accepted at Hohlt & File Funeral Home. Ethan was born January 6, 1994 in St. Louis, MO, the son of Gerald and Shelly (Ruble) Crisman. He was a junior at Mulberry Grove High School, and a former student at Vandalia Christian Academy. He played the guitar and piano for the Mulberry Grove High School band and pep band, and was a member of the band, "To Fight Another Day." He is survived by his parents; a brother, Dalton Crisman; maternal grandparents, Ed and Pat Ruble of Keyesport; and aunts, uncles and cousins. He was preceded in death by his paternal grandparents, William Crisman and Wilma Denton Fraiser.

The family of Ethan Crisman created this Life Tributes page to make it easy to share your memories.