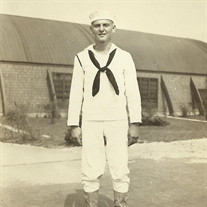 Eugene Newsum Hasler, 92, of Lawrenceville, IL, formerly of Vandalia, passed away at 4:03 PM, Saturday, September 08, 2018 at Lawrence County Memorial Hospital, Lawrenceville, IL Cremation rites will be accorded and interment will follow in Fairlawn Cemetery, Vandalia, IL at a later date. Eugene Newsum Hasler was born on June 11, 1926 in Vandalia, IL, the son of Robert O. and Hulda V. (Garner) Hasler. After his mother’s passing in 1929, he and his siblings were raised by their father and adoptive mother, Celia (Schenker) Hasler. Eugene was a 1944 graduate of Vandalia Community High School. Following his graduation, Eugene enlisted in the United States Navy in which he served during WWII. Two years later, he was honorably discharged due to an injury. Eugene then resided in Lawrenceville where he was a member of the First United Methodist Church and the Ambraw VFW Post #2244. He is survived by his brother, Scott Hasler of Gilbert, AZ; and a nephew, Jim Hasler and wife, Janet of Trimble, MO. He was preceded in death by his parents; a brother, James Robert Hasler; a nephew; and a niece.

The family of Eugene Newsum Hasler created this Life Tributes page to make it easy to share your memories.

Send flowers to the Hasler family.