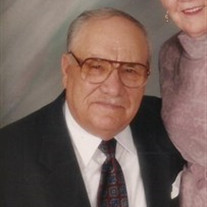 Filbert O. Gehle, 92 of Vandalia, passed away at 6:00 pm, Saturday, March 8, 2014 at his home. Services for Mr. Gehle will be held at 11:00am, Tuesday, March 11, 2014 at Holy Cross Lutheran Church, Vandalia, IL with Pastor Peter Kolb officiating.  Visitation will be held from 9:00am until time of service Tuesday at the church.  Burial will follow in Fairlawn Cemetery, Vandalia.  Memorials may be made to Holy Cross Lutheran Church or to Fayette County Health Department Hospice. Fil was born October 1, 1921 in St. Paul, IL, the son of Martin and Clara (Holman) Gehle.  He married Hilda Rebbe on December 28, 1941 and she preceded him in death on January 31, 1993.  He then married Linda Braasch of February 19, 1994.  Fil was a member of Holy Cross Lutheran Church.  He was a board member for Lutheran Care Center, a member of Fayette County Farm Bureau and served on the Board of Directors for Fayette County Farm Service. Mr. Gehle is survived by his wife Linda of Vandalia; sons David Gehle and wife Nancy of Haslett, MI and Larry Gehle and wife Ann of Jefferson City, MO; brother Norman Gehle of St. Peter, IL; grandchildren Kristi and husband Richard Stoddard of Watson, IL; Jessica Gehle of Olympia, WA; Sean Gehle and wife Dawn of Lansing, MI; and Jared Gehle and wife Kimberly of Chanhassan, MN; and great grandchildren Reagan, Makayla, Vincent, Sydney, Matthew, Brayden, Camden, and Ashlyn. He was preceded in death by his parents, first wife Hilda, one brother and one sister.

The family of Filbert "Fil" Gehle created this Life Tributes page to make it easy to share your memories.