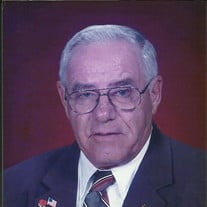 Floyd James “Jim” Jackson Jr., 78, of Vandalia, IL passed away at 6:30 AM, Wednesday, August 01, 2018 at St. John’s Hospital in Springfield. A Funeral Mass will be held at 10:00 AM, Tuesday, August 07, 2018 at Mother of Dolors Catholic Church, Vandalia with Rev. Fr. Joseph Havrilka officiating. Interment will follow in Fairlawn Cemetery, Vandalia. Visitation will be held prior to mass from 9:00 AM- 10:00 AM, Tuesday, August 07, 2018 at Mother of Dolors Catholic Church, Vandalia. Memorials may be made to the Knights of Columbus. Online condolences can be expressed at www.hohltandfilefh.com Floyd James Jackson Jr. was born January 05, 1940 in Pekin, IL, the son of Floyd James and Ethel Marie (Cocagne) Jackson Sr. He married Patricia Ann Schnaus on February 04, 1961. Together they raised five children and were married for 57 years. Jim was a farmer and was also employed by Vandalia Tractor. He was a member of Mother of Dolors Catholic Church and the Knights of Columbus Council #4630. He is survived by his wife, Patricia Jackson of Vandalia; daughters, Deb Jackson of Pontiac, Lisa and husband, Dan Carruthers of Ramsey, and Tracy and husband, Randy Cearlock of Vandalia; sons, Jeff Jackson and partner, Scott Schukar of Greenville, and James Jackson and wife, Amy of Vandalia; brothers, Bob Jackson, Mike Jackson and wife, Mary Ann, and Dan Jackson; sisters, Betty and husband, Wayne Hathaway, and Janet and husband, David Tendick; 14 grandchildren; and 12 great-grandchildren. He was preceded in death by his parents; and siblings, Tom Jackson, Larry Jackson, and Beverly Holbrook.

The family of Floyd James "Jim" Jackson created this Life Tributes page to make it easy to share your memories.