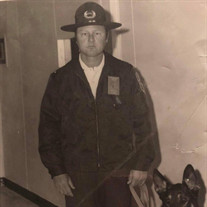 Frankie Anderson Jones, 80, of Vandalia, IL passed away at 9:45 PM, Friday, January 08, 2021 at Greenville Nursing and Rehabilitation Center. A Graveside Service and Interment will be held at 1:00 PM, Monday, January 11, 2021 at Green Hill Cemetery, Van Burensburg with Rev. Robert Weaver officiating. Military Rites will be accorded at the graveside by Crawford-Hale American Legion Post # 95, Vandalia, & Brownstown VFW Post #9770. Memorials may be made to Veterans Affairs. Frankie Anderson Jones was born on November 14, 1940 in Salem, IL, the son of Charles and Cleta (Pierce) Jones. He married Patricia Ann Towell on February 02, 1973. Together, they celebrated nearly 45 years of marriage before her passing on June 22, 2017. Frankie was proud to have served his country in the United States Army. He eventually retired from the Illinois Department of Corrections; where he had the privilege of being the first canine unit for IDOC, prior to that, he was employed at the Vandalia Correctional Center. Frankie was a member of Crawford-Hale American Legion Post #95, Vandalia. Mr. Jones is survived by his daughters, Donna and husband Danny Divine of Neosho, MO, Christine Sanford of Neosho, MO, and Christina Owen of McLeansboro, IL; step-son, Robert Siebert of Frisco, TX; brothers, Randy Jones and Dale Jones; sisters, Linda Alderson and Natasha Hill; grandchildren, Jessica, Elaine, Lori, Jessie, Terea, Jennifer, and Joshua; and several great grandchildren. He was preceded in death by his parents; wife; brother, Jim Jones; and sisters, Marilyn Sloan and Bonnie Proctor.

The family of Frankie A Jones created this Life Tributes page to make it easy to share your memories.

Send flowers to the Jones family.