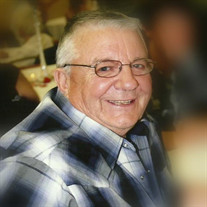 Henry Secondo Portz, 74, of Ramsey passed away Saturday, February 4, 2017 at the Heritage Manor in Pana, IL. A Funeral Mass will be held at 11:00 am, Thursday, February 9, 2017 at St. Mary’s Catholic Church, St. Elmo with Fr. Marek officiating. Visitation will be held from 6:00-8:00pm, Wednesday, February 8, 2017 at Hohlt & File Funeral Home, Vandalia. Memorials may be made to Ramsey Meals on Wheels. Henry Secondo Portz was born May 13, 1942 in Avena, IL, the son of William and Clara (Buff) Portz. Henry’s livelihood was raising grain crops and tending his cattle. He was proud to have worked for over 30 years as a State Park Ranger and retired from Ramsey State Park. He was a member of St. Joseph Catholic Church in Ramsey, Knights of Columbus, and served on the Carson Township Board for many years. Henry was an avid ice fisherman, St. Louis Cardinal and Fighting Illini fan. Henry is survived by his sons Carl Portz and wife Lori of Effingham and Eric Portz and wife Susan of Springfield, daughters Amy Portz and husband Martin Dull of Mahomet and Sara and husband Jason Berg of Vandalia, sister Mary and husband Ronald Howard of Avena, grandchildren : Elizabeth and husband Jonathon Rodgers, Thaddeus Portz and wife Ashley, Katelin Portz, Josie Portz, Benjamin Portz, Grace Portz, Luke Portz, Maximilian Portz, Grant Wingo, Jack Wingo, Stephen Berg, Julianna Berg, Landon Berg, Liam Berg, great grandchildren Oliver, Lillian, Daisy and one great grandbaby on the way. He was preceded in death by his parents and brother Elmer Portz. The family of Henry Portz would like to send a special thanks to the staff and nurses at Heritage Healthcare for giving such special care to their father and to Heather Long and Debbie Evans for their care which allowed him to remain at home on his farm for many years, where he loved to be.

The family of Henry Secondo Portz created this Life Tributes page to make it easy to share your memories.

Send flowers to the Portz family.