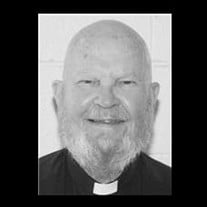 The Rev. James ("Jim") David Fackler, 80, died peacefully on January 23, 2017 in Effingham, IL. He was born on September 18, 1936 in Toledo, OH, to John Paul and Ruth (Moehring) Fackler. Known as Fr. Jim, he served 8 parishes over his 53 years of ministry in the Lutheran and Episcopal Church, and was an oblate at St. Augustine's House in Oxford, MI. As a pastor, teacher, Civil Rights activist, and lover of the outdoors, Jim spent his life serving and seeking Christ in all people and things. Jim leaves to live in the light and love of God his eight sons - Tim (Nathalie), Peter, Paul (Barbara), David (Conrad), Nathanael (Kendrea), Andy (Lisa), Tom (Margaret), and Phillip (Callie) - as well as sixteen grandchildren and brother John (Naomi). He is preceded in death by his wife of 55 years, Joan Ruth, his oldest son Victor, his parents, and his brother Bob. Funeral services will be held Friday, January 27, at 10 a.m. at St. Thomas Episcopal Church in Salem, IL. His ashes will be interred with Joan's at St. Augustine's House at a later date. In lieu of flowers, gifts in Jim's memory can be sent to St. Augustine's House or Missouri Botanical Garden.

The family of Rev James David Fackler created this Life Tributes page to make it easy to share your memories.

Send flowers to the Fackler family.