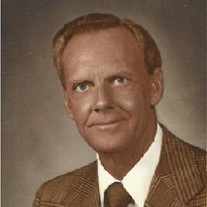 James E. Sprayberry, Jr., 89, of Vandalia, IL passed away at 4:55 PM, Tuesday, March 20, 2018 at Fayette County Hospital LTC. A Funeral Service will be held at 3:00 PM, Saturday, March 24, 2018 at Hohlt and File Funeral Home, Vandalia with Rev. Robert Weaver officiating. Interment will follow in Fairlawn Cemetery, Vandalia. Visitation will be held one hour prior to services Saturday at the funeral home. In lieu of flowers memorials may be made to the Long Term Care Activity Fund. James E. Sprayberry, Jr. was born on January 2, 1929 in Fouke, AR, the son of Cora (Coston) and James E. Sprayberry, Sr. He was a U.S. Navy veteran serving in WWII. James married Bettye Melton on June 27, 1948 in Fouke, AR. She preceded in death on June 27, 2016; allowing them 68 years of marriage. Jim was employed by Exxon Mobil as and oil field worker which brought them and their two children to Vandalia. He enjoyed his time spent at the Vandalia Country Club and was a member of First Baptist Church, Vandalia and Crawford-Hale American Legion Post #95. He is survived by his daughter, Cynthia Scoles and husband Mike of Casa Grande, AZ; son, Tom Sprayberry and wife Karen of Blairsville, GA; sister, Dottie Butcher of Minden, LA; grandchildren, Shane Sprayberry, Emily Havard and husband Chandler, Sean Scoles and wife Sharon, Jason Scoles and wife Wendy, and Bryan Scoles and wife Samantha; and 13 great-grandchildren. He was preceded in death by his parents, James and Cora Sprayberry and his wife, Bettye Sprayberry.

The family of James E. Sprayberry Jr. created this Life Tributes page to make it easy to share your memories.

Send flowers to the Sprayberry family.