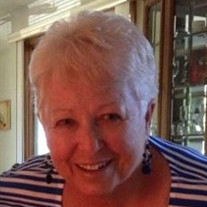 Jane A. Brown, 78, of Vandalia passed away at 5:45pm, Wednesday, June 3, 2015 at Greenville Regional Hospital. Funeral Services will be held at 3:00pm, Sunday, June 7, 2015 at Unity Baptist Church, Hwy 185 Location, Vandalia with Rev. Robert Weaver officiating.  Visitation will be held from 1:00-3:00pm, Sunday, June 7, 2015 at Unity Baptist Church, Hwy 185 Location, Vandalia. At the request of Jane and her family her body will be cremated after services. Hohlt & File Funeral Home of Vandalia is in charge of arrangements.  Online condolences are available at www.hohltandfilefh.com Jane was born in DuQuoin, IL on February 9, 1937, the daughter of William and Florene Cheek.  On December 30, 1956 she married Thomas J. Brown of DuQuoin, her first date and childhood love.  After their marriage Tom and Jane moved to Chicago, then to the suburb of Lombard, IL where they lived for approximately 13 years. During their time in Lombard, Jane was an active member of the Lombard Bible Church, there she served as a leader for the Pioneer Girls, and organization for ages jr. high through high school.  In addition, she taught Sunday School for high school girls, was a camp leader for Camp Cherith and with her husband coordinated Bible School for age birth through adulthood.  At this time she was also a member of ECWA, Evangelical Child Welfare Association where she as council representative.  Another phase of Jane's life began in Lombard, as she began her college career at the College of DuPage. Due to a change in her husband's profession, in 1971, the family made the move to Vandalia.  Other than raising four children, Jane took an interest in the school system and ran as a candidate for the Vandalia School Board in 1974.  While on the board she served as Secretary of the Board for 5 years. She was also elected to Chairperson for the Kaskaskia Region.  In this capacity, Jane served on the financial committee for the State Board of Education and became a member of the Right to Read program. Aside from the school system, Jane was employed by Fayette County Hospital for 17 years. At this time she completed her degree, and Associate degree from Kaskaskia College and her Bachelor's degree from Concordia University where she graduated cum laude.  In addition, Jane was a certified Accredited Records Technician which enabled her to work in the medical records department.  In September 1998, Jane embarked on the career that was her true love, TEACHING.  She began substitute teaching for the Vandalia School District #203 at that time.  Eventually, the high school was her usual place of work.  There she taught summer school English, served as a grief counselor and loved any roll she undertook for the students.  Sports were a very top priority for Jane and with her husband she was an avid Vandalia basketball fan.  However, all sports were very important. On the fun side, Jane enjoyed traveling with her husband all over the United States and playing golf and bridge.  She was a member of the Vandalia Country Club and Vandalia Ladies Golf Association where she had served as secretary/treasurer.  She also belonged to the St. Elmo Country Club. Her love of the Lord Jesus Christ began at an early age.  She was baptized at the First Baptist Church of DuQuoin, IL and had her church membership at Lombard Bible.  "Mrs. Brown" as her students would say is survived by her husband Thomas J. Brown of Vandalia; daughters Krystal and husband Greg Hohlt of Vandalia, Stacy and husband Tim McMillan of Brownstown, and Micki and husband Scott Durbin of Vandalia; son Tom Brown and wife Paige of Waterloo, IL; grandchildren Kristoffer Taylor and wife Michelle, Brett Taylor and wife Mindy, Brianne and husband Jason Garner, Erin and husband Steve Sash, Caitlin Hines and friend Adam Reinhold, Marion Brown and wife Brandy, Terre brown, Devin Durbin, Mike Durbin, Chris Durbin and wife Amanda, Madison brown, Nathan Brown, and Luke Hohlt and wife Megan; great grandchildren Zoe, Ally, Natalie, Kynley, Sylas, Mabry, Dakira, Sloan, Zach, Justin, and Zane. She was preceded in death by her parents.

The family of Jane Brown created this Life Tributes page to make it easy to share your memories.