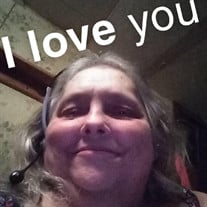 Janet Kay Cox, 59, of Ramsey, IL passed away at 3:00 AM, Monday, September 16, 2019 at Fayette County Hospital. A Memorial Service will be held at 2:00 PM, Saturday, September 21, 2019 at Hohlt & File Funeral Home, Vandalia with Rev. Robert Weaver officiating. Visitation will be held prior to the service from 12:00 PM-2:00 PM, Saturday, September 21, 2019 at the funeral home. Memorials may be made to the family. Janet Kay Cox was born on December 28, 1959 in Alton, IL. She married Kenneth Cox; he preceded in death in 2005. Janet was a homemaker and former tax professional at H & R Block in Hillsboro, IL. Janet loved her family, friends, and making the most out of her life. She enjoyed playing Xbox and making many Tik-Tok videos. She is survived by her daughter, LaWanda and husband Jeremy Davis of Vandalia; son, David Ivey of Ramsey; brothers, Steven McNish, David McNish, and Timothy Cox; sister, Tina Martin; and grandchildren, Laura Davis, Jonathan Ivey, and Mea Ivey. She was preceded in death by her parents, Donald and Wanda (Sauls) Cox; husband, Kenneth Cox; and sisters, Clara Watkins and Patricia Morgan.

The family of Janet Kay Cox created this Life Tributes page to make it easy to share your memories.

Send flowers to the Cox family.