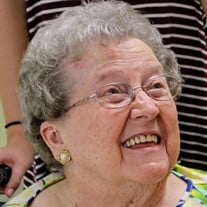 JANET MOELLER MESEKE, 93, of Vandalia, Illinois, went to her heavenly home on December 15, 2020, at Fayette County Hospital Long-Term Care where for over six years she had received loving care. There will be no service at this time. A private committal service will be held at Fairlawn Cemetery with Rev. Michael Mohr, pastor at Holy Cross Lutheran Church, presiding. Memorials may be directed to the Holy Cross Lutheran Church Radio Mission or to the Fayette County Hospital Long-Term Care Activity Fund. Janet was born as the only child to Ernest and Irene Moeller of Shobonier, Illinois, on September 2, 1927. She was baptized and confirmed at St. Paul Lutheran Church, Shobonier. Janet married Raymond Meseke on June 8, 1947, at St Paul Lutheran and they were blessed with two daughters – Sharon and Diane. Janet and Ray farmed in Wilberton Township until 1988 when they retired and moved into Vandalia. Janet enjoyed helping Ray on the farm, tending her garden, sewing for her daughters, puzzles, pinochle, dominoes, needlework, and quilting. Her favorite activity was spending time with her children, grandchildren and great-grandchildren. After marrying, she was a faithful member of Immanuel Lutheran Church, Shobonier and since 1988 at Holy Cross Lutheran Church, Vandalia. Janet is survived by her daughter Sharon and her husband David Reed of Indianapolis, IN and her son-in-law Keith Torbeck of Vandalia, IL; Grandchildren – Matthew (Brenda) Reed of Fishers, IN, Melissa (Ed) DuCharme of Apex, NC, Kimberly (Patrick) Dudra of Rockmart, GA, and Tiffany (Doug) Erickson of Macomb, IL; Great-Grandchildren – Alec and Emily DuCharme, Hannah and Hailey Reed, Anthony Dudra, and Alice and Magnolia Erickson; Brothers-in-law Rev. Gilbert (Charlaine) Meseke of New Haven, IN, Dennis (Evelyn) Meseke of Shobonier, IL, George (Amy) Meseke of Vandalia, IL; Sister-in-law Mildred Meseke of Altamont, IL; twelve nieces and eight nephews. Janet’s husband of 67 years, Ray, and her daughter, Diane Torbeck, both passed away in 2014. In addition, Janet was preceded in death by her parents; brothers-in-law Rev. Ervin (Alma) Meseke, Norman (Irene) Meseke, Floyd Meseke, Forrest (Arlene Meseke) and two nephews.

JANET MOELLER MESEKE, 93, of Vandalia, Illinois, went to her heavenly home on December 15, 2020, at Fayette County Hospital Long-Term Care where for over six years she had received loving care. There will be no service at this time. A private... View Obituary & Service Information

The family of Janet Meseke created this Life Tributes page to make it easy to share your memories.

JANET MOELLER MESEKE, 93, of Vandalia, Illinois, went to her...

Send flowers to the Meseke family.