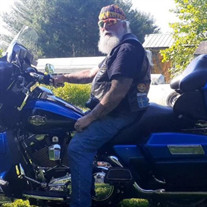 Jimmy Joe Gelsinger, 65, of Brownstown, IL passed away Thursday, February 24, 2022 at his daughter’s home in Ina. A Visitation will be held from 5:00-7:00 PM, Tuesday, March 01, 2022 at Hohlt & File Funeral Home, Vandalia. Following services, cremation rites will be accorded. Interment will be held at a later date in Farmers Cemetery, rural Shobonier. Memorials may be made to the family to help with expenses. Online condolences can be expressed at www.hohltandfilefh.com Jimmy Joe Gelsinger was born on January 31, 1957, in Vandalia, IL the son of Junior and JoAnn (Grotts) Gelsinger. He was a United States Army Veteran. Jimmy was a jack of all trades. He had an avid love for riding Harley-Davidson motorcycles, working on his many vehicles, raising pit bulls, and doing anything outdoors-such as camping and fishing. He cherished the time spent with his family, especially his grandchildren. Mr. Gelsinger is survived by his daughter, Jamie Hart of Ina; step-son, Chad Kluck and wife Heidi of Ina; brother, Stanley Gelsinger of Vandalia; sisters, Joyce Frailey with Cary Bare of Kinmundy, Janet and husband Steve Goodson of Greenville, Lisa Gelsinger with Rob Wuehler of St. Elmo, and Jessica and husband TW Branham of Atlanta; grandchildren, Zachary Morgan, Kassidy Hart, Megan Kluck, and Hunter Kluck all of Ina, Kaytee Matheny and Trinity Branham of Atlanta; great-granddaughters, Ophelia Clinton and Emery Kluck; and several nieces and nephews. Preceded in death by his parents and son, James Robert Gelsinger.

The family of Jimmy Joe Gelsinger created this Life Tributes page to make it easy to share your memories.

Send flowers to the Gelsinger family.