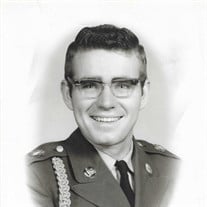 John Eugene Etcheson Sr. 74, of Vandalia, IL passed away Sunday, December 05, 2021 at his home surrounded by family. A Graveside Service will be held at 1:00 PM, Thursday, December 09, 2021 at Fairlawn Cemetery, Vandalia with Military Rites accorded by Crawford-Hale American Legion Post # 95, Vandalia & Brownstown VFW Post #9770. Memorials may be made to an organization of the donor’s choice. Online condolences can be expressed at www.hohltandfilefh.com John Eugene Etcheson Sr. was born on April 25, 1947 in East Liverpool, OH, the son of Edgar E. and Florence Evadine (Kile) Etcheson. He married Iona Jean Bell on April 16, 1967; together they celebrated 54 years of marriage and raised six children. John was a proud Vietnam Veteran having served in the United States Army. He was then employed as a security guard for many years; his last place of employment being at The Hilton in Branson, MO. John was a member of the First United Methodist Church of Vandalia and former member of the Crawford-Hale American Legion Post #95 and V. F. W. Post # 3862. He loved wrenching on cars, fishing, and spending time with his family. Mr. Etcheson is survived by his wife, Iona Etcheson of Vandalia; sons, John Etcheson Jr. and wife Cathy of Vandalia, Kevin Etcheson and wife Angela of Vandalia, Paul Etcheson and wife Coni of Ruskin, FL, and Jason Etcheson and wife LaDonna of Vandalia; daughters, Jeanna and husband Al Appugliese of St. Petersburg, FL and Patricia and husband John Shelton of Taneyville, MO; 30 grandchildren and numerous great-grandchildren. He was preceded in death by his parents.

The family of John Etcheson Sr. created this Life Tributes page to make it easy to share your memories.

Send flowers to the Etcheson family.