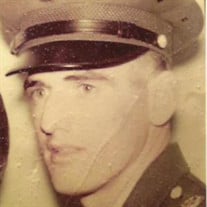 JJohn James “Jim” Howard, 77, of Le Roy, IL passed away on July 20, 2020 at Carle BroMenn Medical Center in Normal, IL. A Funeral Service will be held at 11:00 AM, Thursday, July 23, 2020 at Hohlt & File Funeral Home, Vandalia, IL with Rev. Thomas Goodell officiating. Interment will follow in Griffith Cemetery, Brownstown, IL with military rites accorded at the graveside by the Brownstown V.F.W. Post #9770. Visitation will be held one hour prior to the service from 10:00-11:00 AM, Thursday, July 23, 2020 at the funeral home. Memorials may be made to St. Jude Children’s Research Hospital. John James Howard was born on July 28, 1942 in Chicago, IL, the son of John James Howard and Sybil (Thompson) Evans. He married Alma Irene Penn on December 31, 1964; together they celebrated 55 years of marriage and raised one son. Jim was a retired track supervisor for Norfolk Southern Railway. He was an avid fisherman and enjoyed gambling, spending time at the lake, and in his younger years, dirt track racing at the Fayette County Speedway. Jim was a United States Army Veteran, serving in Vietnam and member of the Brownstown, IL V.F.W. Post #9770 and American Legion Ruel Neal Post # 79, Le Roy, IL. He is survived by his wife of 55 years, Alma Howard and son, James William “Jimmy” Howard, both of Le Roy; grandchildren, Finley Penn Marett Howard and Landon James Howard; brothers, Ronald K. Howard and wife Mary of St. Elmo and Kenneth B. Howard of Arrowsmith, IL; and sister, Deborah and husband Jeff Jones of Vandalia. He was preceded in death by his parents and brother, Michael Matheny.

The family of John J. "Jim" Howard created this Life Tributes page to make it easy to share your memories.

Send flowers to the Howard family.