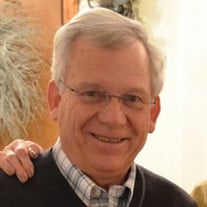 John Howard Burnside died Saturday, April 18, 2015, at his home in Anderson Township, Ohio, a suburb of Cincinnati. He was 68 years old. Mr. Burnside was born December 26, 1946, to Robert G. and Mary Burnside of Vandalia, Illinois. He graduated from Vandalia Community High School in 1965. In 1969, he was awarded a bachelor's degree from the School of Engineering at Southern Illinois University in Carbondale, Illinois. In 1968, he was married to the former Sherry Baumann, at the First Baptist Church of Vandalia, with the Rev. Archie Brown officiating. Sherry was the love of his life, as he was the love of her life.  A daughter, Shelly Dawn, was born to them in 1970. In 1969, the family moved to Livonia, Michigan, where Mr. Burnside went to work as an engineer for the Ford Motor Co.  In 1978, he and his family moved to Cincinnati, Ohio, where he built the Batavia Transmission Plant for Ford.  He then worked in management at the plant, until retiring in 1999. Mr. Burnside was a trustee of Anderson Hills United Methodist Church in Anderson Township. He served on the board of the Association of Retired Methodist Men (ARMM) and was a trustee of Five­ Mile Chapel. Mr. Burnside lived a life of generous service. A talented carpenter, plumber, electrician, landscaper, and computer operator, among other things, "he loved to help people," said his daughter Shelly. Mr. Burnside is survived by his wife Sherry of Anderson Hills; daughter Shelly of Birmingham, Michigan; brother Gordon of Edwardsville, Illinois, sisters Elizabeth, of Vandalia, Illinois, and Anne, of Iowa City, Iowa; brother-in-law Harold Baumann, of Vandalia, Illinois; and many nieces and nephews. Mr. and Mrs. Burnside had established a scholarship fund for engineering students from Fayette County, Illinois. In lieu of flowers, memorial donations may be made to the fund:  Old Capitol Foundation / Burnside Scholarship Fund  Address: Trust Dept, First National Bank of Vandalia, 311 Bankers Boulevard, Vandalia, Illinois 62471 Graveside services will be held at 11:30am, Friday, April 24, 2015 at Fairlawn Cemetery, South 6th Street, Vandalia, IL at 11.30am with Rev. Robert Weaver officiating.  Hohlt & File Funeral Home in charge of arrangements.

John Howard Burnside died Saturday, April 18, 2015, at his home in Anderson Township, Ohio, a suburb of Cincinnati. He was 68 years old. Mr. Burnside was born December 26, 1946, to Robert G. and Mary Burnside of Vandalia, Illinois. He... View Obituary & Service Information

The family of John Burnside created this Life Tributes page to make it easy to share your memories.