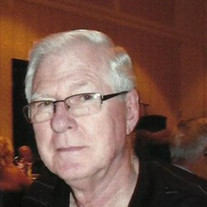 John Edward Truitt, 75, of Shobonier, IL passed away at 4:45pm, Sunday, August 30, 2015 at the Altamont Lutheran Care Center. Services for Mr. Truitt will be held at 10:00am, Wednesday, September 2, 2015 at Holy Cross Lutheran Church, Vandalia with Pastor Jerry Bagwell officiating.  Visitation will be held from 9:00-10:00am, Wednesday morning, prior to services at the church.  Burial will be in Fairlawn Cemetery with military rites accorded by Crawford-Hale American Legion Post # 95, Vandalia, IL and Brownstown VFW Post #9770.  Memorials may be made to Holy Cross Lutheran Church, Vandalia.   John was born December 30, 1939 in Edwardsville, the son of Harry and Gladys (Daech) Truitt.  He married Marilyn Meseke on June 17, 1962 in Vandalia.  John was a US Navy Veteran.  While in the military he was an electronic technician, after his service John finished schooling at SIU Carbondale and worked as an accountant for Caterpillar before he retired.  John loved the Lord, his family, his country, and fishing. He is survived by his wife Marilyn Truitt of Shobonier; sons John Truitt Jr. and wife Gina of Shobonier, Michael Truitt and wife Brandy of St. Elmo, and Jason Truitt of Shreveport, LA; sister Mary Truitt of Vandalia; and seven grandchildren. He was preceded in death by his parents and brother Bill Truitt.

The family of John Truitt created this Life Tributes page to make it easy to share your memories.