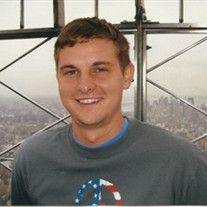 Larrey Walton Gale, 31, of Vandalia, died Monday, September 1, 2014 in an automobile accident near Mulberry Grove, IL. Mass of Christian burial will be held at 10:00AM, Saturday, September 6, 2014 at Mother of Dolors Catholic Church, Vandalia, IL with Rev. Fr. Barry Harmon and Rev. Fr. Joseph Havrilka officiating.  A Rosary will be held at 9:00AM, Saturday, September 6, 2014 at Mother of Dolors Catholic Church, Vandalia, IL.  Visitation will be held from 5:00-8:00pm, Friday, September 5, 2014 at Mother of Dolors Parish Hall, Vandalia, IL (across from Catholic Church).  Honorary Pallbearers: Yale Reynolds, Michael Reynolds, Benjamin Steinhauser, Lauren Steinhauser, Chris DuPlayee and Andy DuPlayee.  Burial will follow mass in Mother of Dolors Catholic Cemetery.  In lieu of flowers memorials may be made to the Larrey Gale Memorial Fund at www.youcaring.com or in person at time of services. Larrey was born June 21, 1983, in Parkersburg, WV, the son of the late Dr. Larrey Gale and Cheryl Walton Gale.  He attended Vandalia Community Schools, St. Anthony's HS in Effingham, John A. Logan College, and SIU Carbondale.  He was a member of Mother of Dolors Catholic Church in Vandalia, where he was mentored by his beloved friends Jackie DuPlayee, Cheryl Sasse, Fr. Steve Sotiroff and Fr. Joseph Havrilka, and also by his aunts and uncles.  Larrey was especially beloved by his grandmother Helen Walton.  He was employed by Wildlands Outdoor Equipment in Vandalia.  His greatest pleasures were spending time with his friends and family, playing his guitar, cooking, shooting pool, cheering for the STL Cardinals and San Antonio Spurs.   He had a great love for the community of Vandalia, and it was his sincere desire to spend his life here, marry and raise a family.   He is survived by his mother Cheryl Gale of Vandalia; sister Kathleen Gale and special friend Mark Misquitta of New York, NY; aunts Diane and husband Joe Reynolds of Effingham, IL and Barbara and husband Franklin Steinhauser of San Antonio, TX; cousins Yale Reynolds and Michael Reynolds both of Effingham, IL, Benjamin Steinhauser and Lauren Steinhauser both of San Antonio, TX. He was preceded in death by his father Dr. Larrey B. Gale, grandparents Dr. George and Carolyn Gale and Slater and Helen Walton.

The family of Larrey Gale created this Life Tributes page to make it easy to share your memories.