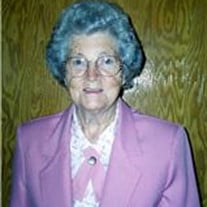 Leola L. (Rohlfing) Lange, 91, of Shobonier, IL passed away at 12:10am, Wednesday, April 10, 2013 at Decatur Memorial Hospital. A funeral service will be held at 11:00 am, Saturday, April 13, 2013 at Augsburg Immanuel Lutheran Church with Pastor Doulas Meyer officiating.  Burial will follow in Augsburg Immanuel Lutheran Church Cemetery.  Visitation will be held from 6-8pm, Friday, April 12, 2013 at Augsburg Immanuel Lutheran Church and 1 hour prior to services at the church Saturday. Mrs. Lange was born September 24, 1921, in Wilberton Township, Fayette County, IL, the daughter of Albert E. and Irene A. (Torbeck) Rohlfing.  She was baptized October 21, 1921 and was confirmed April 14, 1935.  Leola married Walter P. Lange on October 1, 1939 at Immanuel Lutheran Church - Augsburg. She was a farmer's wife and a mother, together Leola and Walter had three children, sons Larry and Kenneth and daughter Loretta.  Walter preceded Leola in death on May 17, 1997. She was also preceded in death by her parents, son Kenneth, brother Wilbert, and sisters Ruby and Rita.  Leola is survived by her son Larry Lange and wife Karen of Macon, IL; daughter Loretta and husband Alan Harrison of Vandalia; sister in law Lois Rohlfing of Venura, CA; 7 grandchildren; 11 great grandchildren; and 2 great-great grandchildren.

The family of Leola Lange created this Life Tributes page to make it easy to share your memories.