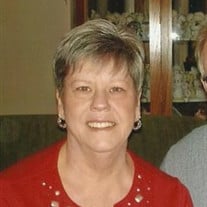 Marjorie A. Blythe, 72, of Vandalia passed away at 1:16pm, Monday, March 16, 2015 at her home. Services for Mrs. Blythe will be held at 11:00am, Friday, March 20, 2015 at Unity Baptist Church (Corner of 6th and Johnson formerly First Baptist Church) with Rev. Robert Weaver and Rev. Joe Lawson officiating.  Visitation will be held from 6:00-8:00PM, Thursday, March 19, 2015 at Unity Baptist Church (Corner of 6th and Johnson former First Baptist Church) and 1 hour prior to services at the church Friday. Burial will be in Fairlawn Cemetery, Vandalia.  Memorials may be made to Evans Public Library, Habitat for Humanity, or Vandalia Christian Academy.  Marjorie was born July 23, 1942 in Perkins, MO, the daughter of Joe and Effie (Morgan) Jackson.  She married John L. Blythe on June 1, 1963 in Wolf Island, MO.  Marjorie was very active in the community of Vandalia and surrounding area.  She ran the A & W Restaurant in Vandalia from 1970-1973, worked at Arthur Young Inc. for roughly twenty years during the 80s-90s before working for the City of Vandalia as City Treasurer from 1997-2013, she then retired as an accountant for Illinois Department of Transportation.  During those working years, she got her pilots license in 1994, and finished a Bachelor degree in 1998 and in her free time she enjoyed reading.  Marjorie was a member a Unity Baptist Church, formerly First Baptist Church of Vandalia, she was a former treasurer and member of the  Republican Women's Group, Habitat for Humanity, Greenville Pilots Association, she was a school board member and treasurer for Vandalia Christian Academy, and a member of the Vandalia Park Board. Mrs. Blythe is survived by her husband John Blythe, sons Jeff Blythe and Joe Blythe, daughter Julie and husband Joe Withers, grandson Cameron Withers all of Vandalia, brother Chuck Jackson of Cape Girardeau, MO and sister Janice Webb of Jefferson City, MO. She is preceded in death by her parents, brother Terry Jackson and sister Barbara Organ.

The family of Marjorie Blythe created this Life Tributes page to make it easy to share your memories.