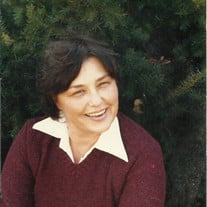 Mary Louise Bowles, 80, of Vandalia, IL passed away at 8:41 PM, Thursday, November 29, 2018 at her home. A Memorial Service will be held at 6:00 PM, Friday, December 14, 2018 at Hohlt and File Funeral Home, Vandalia. Visitation will be held prior to services from 4:00-6:00 PM, Friday, December 14, 2018 at Hohlt and File Funeral Home. Memorials may be made to Second Chance Animal Rescue. Mary Louise Bowles was born on March 15, 1938 in Makanda, IL the daughter of Lloyd and Mildred (Short) Chandler. She was retired from the Central Intelligence Agency; while working for the CIA she was also a contracted tech worker for the United States Air Force during the 60’s. Mary was very proud of her service for the intelligence agency; she thoroughly enjoyed her work and the time she got to spend travelling abroad. She was a loving mother, grandmother, and adored her pets. Mary was affiliated with the Lutheran Faith. She is survived by her son, Charles Bowles and wife, Melanie of Vandalia; son, Michael Bowles and wife, Tanya of Vandalia; sister, Judith and husband, David Pheanis of Phoenix, AZ; grandchildren, Damon and wife, Jessamie, Charlie, Mariana, Michael, and Shelby Bowles; great-granddaughter, London Bowles; sister-in-law, Linda Bowles; and niece, Theresa Fossier. She was preceded in death by her parents, brother, Jerry; sister, Janette; and an infant son Gregory.

The family of Mary Louise Bowles created this Life Tributes page to make it easy to share your memories.

Send flowers to the Bowles family.