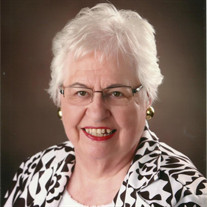 Mary J. Truitt, 87, of Vandalia, IL passed away at 7:12 PM, Friday, June 18, 2021 at HSHS St. John’s Hospital, Springfield. A Memorial Service will be held at 11:00 AM, Saturday, June 26, 2021 at the First Presbyterian Church, Vandalia with Pastor Kurt Simon officiating. A Private Committal Service will follow in Fairlawn Cemetery, Vandalia. Visitation will be held prior to the service from 10:00-11:00 AM, Saturday at the church. In lieu of flowers, memorial donations may me made to the National Road Interpretive Center or to the Historical Museum. Online condolences can be expressed at www.hohltandfilefh.com Mary J. Truitt was born on September 25, 1933 in Edwardsville, IL, the daughter of Harry and Gladys (Daech) Truitt. After graduating from Vandalia Community Schools, Mary attended Southern Illinois University Carbondale where she obtained a teaching degree. With that degree, she was offered several teaching contracts; accepting one in Milwaukee, WI. Mary eventually retired from Milwaukee Public Schools after 35 years of employment. She then moved back to her home town of Vandalia to care for her elderly mother. After her mother’s passing, Mary went on to work for Kaskaskia College where she taught Child Development. She also became employed by Lake Land College working at the Vandalia Correctional Center teaching Child Development, Family Relations, Adult Living, Nutrition, and Sociology. Her part time relation with Lake Land College lasted for 11 years. While most choose to relax after retirement, Mary chose to be involved in numerous organizations and activities for the betterment of women’s lives and the community in which she lived. First, joining the Soroptomist International of Vandalia in the fall of 1990 and serving as their president from 1996-1998. Though a lot of Mary’s time was occupied through teaching, she still found the time to volunteer anywhere she could. She was asked to join the City’s Tourism Council. Then came volunteering at the Fayette County Museum. After that, the State of Illinois offered new programs and in 1997 she was appointed by the city council to represent Vandalia for two of those programs that eventually became known as Looking for Lincoln and the National Road Association of Illinois. She served as President of the National Road Association three different times and was President as they developed the National Road Interpretive Center here in Vandalia. Mary loved visitors at the Interpretive Center. She welcomed them from all over the US. School groups were among her favorites. She could entertain them for hours with stories about the Road. Mary was also involved in the formation of the Abraham Lincoln National Heritage Area Program; which involves the road signs along the interstate. She served on the Steering Committee since its inception. At some point along the way, Mary decided to join the Vandalia Woman’s Club; where she served at both, the local level and the district level. Serving as the District President for three terms and on the State Board of the Illinois Federation of Women’s Club for 20 years. In addition to her many positions, Mary served on the Vandalia Mural Committee and was a member of the Red Hat Society. Mary still volunteered her time at the Museum, the National Road Interpretive Center, and served on the Board on the National Road Association of Illinois. Growing up, Mary learned a lot about Lionism; her father was very active in the Lion’s Club. As the years passed, she became very interested in Lionism herself. In 1988 the Supreme Court declared that service organizations be open to both genders, so upon her homecoming she was asked to be the first woman member of the Vandalia Lions Club. She served in many ways at the local level; being President twice and writing the local newsletter. She served as District Governor in 2004-2005 and most recently served as the Global Leadership Team chair. Mary served for several years on the Board of the Lions of Illinois Foundation. Among her many accomplishments, Mary has been named as an Outstanding Woman of Illinois, the Woman of Distinction in Human Relations from the Soroptimists, Lions Outstanding Member, and Foundation Fellow from the Lions of Illinois Foundation. She has received the Vandalia Chamber of Commerce Abe Award, the Illinois Office of Tourism Lincoln Award, the International President’s Leadership Award and five certificates of appreciation. At the local level, she received a Foundation Fellow and received recognition as the Grand Marshall of the Halloween Parade. Mary was forever proud and appreciative to be a Soroptomist. She is survived by her sisters-in-law, Marilyn Truitt of Vandalia and Donna Truitt of Kansas City, MO; nephews, John Truitt, Mike Truitt, Jason Truitt, Edward Truitt, and Andy Truitt; nieces, Lauren Truitt Wagner and Cheryl Truitt Dorris; and several great nieces and great nephews. She was preceded in death by her parents and brothers, Dr. Bill Truitt and John Truitt.

The family of Mary J Truitt created this Life Tributes page to make it easy to share your memories.

Send flowers to the Truitt family.