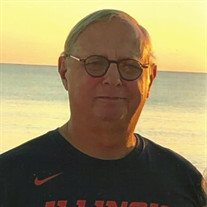 Michael Butler, 71, of Vandalia, passed away peacefully on March 1, 2021. He was born in Jerseyville, IL. He was the son of the late David Butler and the late Mildred Butler. He was married to Dian (Karrick) Butler, who survives. They were married on June 11, 1972, in Jerseyville, IL. Mike was a wonderful husband to Dian, loving father to Nathan and Anthony; and a proud Pops to Addison and Gracin. But his passion was basketball: the Fighting Illini, his Lady Vandals; and, most recently, he didn’t miss a Columbia Eagles game to watch his granddaughters play. He retired as the Vandalia High School Girls Basketball Coach in 2009 after leading the Lady Vandals to their winningest season in school history and being inducted to the Illinois Basketball Coaches Association Hall of Fame. He began his teaching career at St. Francis Holy Ghost Catholic School in Jerseyville, then Calhoun High School in Hardin before coming to Vandalia where he taught Junior High and then High School. After nearly 40 years of teaching history in the classroom, it was time for Mike & Dian to visit many of those historical places. Mike and Dian’s home base may have been Vandalia, but in retirement, they traveled from coast to coast, plus numerous trips to Hawaii. Mike firmly believed it was 5 o’clock somewhere; and sometimes, to Dian’s dismay, they coincidentally would arrive in the same city on the same day as Jimmy Buffet’s concert. Above all, Mike was a family man. He made sure he and Dian never missed one family celebration or granddaughters’ game or performance. Also surviving are his sons Nathan (Kristin) Butler of Columbia, IL and Anthony (Anna Todd) Butler of Chicago; granddaughters, Addison and Gracin Butler; sister Jennifer Burgess of Virginia; nieces and nephew and countless relatives and friends. In addition to his parents, he was preceded in death by his sister Peggy Smith and brother-in-law Kenneth Smith. Visitation will be Thursday, March 11th at First Presbyterian Church of Vandalia, IL from 9-11am. Memorial Service will follow at 11am with Rev. Kurt Simon officiating. The family requests you to wear a Hawaiian shirt or Illini orange in Mike's memory. The family also requests you wear a mask and social distance during the visitation and service. All COVID-19 protocols will be followed. Hohlt & File Funeral Home, Vandalia, and Alexander Gubser Funeral Home, Jerseyville, are assisting with arrangements. Interment will be on Friday, March 12th at 11am at Newbern Cemetery in Dow, IL. In lieu of customary remembrances, the family requests with gratitude that memorial contributions be directed to First Presbyterian Church of Vandalia, IL where Mike was an Elder member.

Michael Butler, 71, of Vandalia, passed away peacefully on March 1, 2021. He was born in Jerseyville, IL. He was the son of the late David Butler and the late Mildred Butler. He was married to Dian (Karrick) Butler, who survives. They were married... View Obituary & Service Information

The family of Michael Butler created this Life Tributes page to make it easy to share your memories.

Michael Butler, 71, of Vandalia, passed away peacefully on March...

Send flowers to the Butler family.