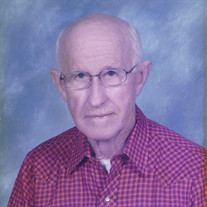 Miles Calvin Filer, 96, of Vandalia, IL passed away at 9:42 AM, Thursday, October 19, 2017 at Vandalia Rehabilitation and Health Care Center. A Funeral Mass will be held at 10:30 AM, Tuesday, October 24, 2017 at Mother of Dolors Catholic Church, Vandalia with Rev. Fr. Zachary Edgar officiating. Burial will follow in Mother of Dolors Catholic Cemetery, Vandalia. Military Rites accorded at graveside by Crawford-Hale American Legion Post # 95, Vandalia. Visitation will be held from 6:00- 8:00 PM, Monday, October 23, 2017 at Hohlt and File Funeral Home, Vandalia. In lieu of flowers memorials may be made to Caring and Sharing, Mother of Dolors Catholic Church, Crawford-Hale American Legion Post #95, or Fayette County Health Department Hospice. Miles Calvin Filer was born May 13, 1921 in Vandalia, IL the son of Rufus Calvin and Lillian “Ruth” (Miles) Filer. He married Erma T. Bodlovich on June 30, 1951; she preceded him in death on February 12, 2003. Miles was a United States Army veteran serving as a paratrooper in WWII, having jumped on D-Day as a member of the 508th Parachute Regiment in the 82nd Airborne Division. He was a Prisoner of War for 11 months and was liberated from a Czechoslovakian coal mine in May of 1945. Later in life, Miles was a self-employed dairy farmer and he and Erma raised their four children on their farm in rural Vandalia. He later worked for the City of Vandalia Street Department. Following his second retirement, he continued mowing various properties around Vandalia, while gardening and raising steers each year into his early 90s. He was a member of Mother of Dolors Catholic Church, Crawford-Hale American Legion Post #95, and Knights of Columbus Council #4630. He is survived by his daughters Teresa Filer and husband Max Roler of Los Angeles, CA, and Paula and husband Kim Edgar of Vandalia; daughter-in-law Jane Filer of Chapel Hill, NC; sister Ferrel Lowe of Vandalia; and grandchildren Rev. Fr. Zachary Edgar and Hannah Edgar. He was preceded in death by his parents, wife, sons John Filer and Paul Filer, brothers Benjamin Filer and Darrell Filer.

Miles Calvin Filer, 96, of Vandalia, IL passed away at 9:42 AM, Thursday, October 19, 2017 at Vandalia Rehabilitation and Health Care Center. A Funeral Mass will be held at 10:30 AM, Tuesday, October 24, 2017 at Mother of Dolors Catholic Church,... View Obituary & Service Information

The family of Miles C Filer created this Life Tributes page to make it easy to share your memories.

Send flowers to the Filer family.