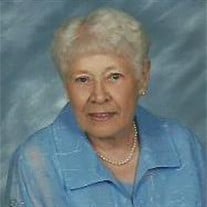 Opal “Ruth” Dees, 96, of Vandalia, IL passed away on Monday, December 23, 2019 at Fayette County Hospital Long Term Care. In accordance with the wishes of the family, cremation rites will take place and there will be no services held at the time. A private graveside service will be held at a later date. Memorials may be made to the Samaritan’s Purse. Opal Ruth Dees was born on October 04, 1923 in Otego Township, IL, the daughter of Vivian and Eva (McMillan) Radliff. Ruth spent her early years in Four Mile, Brownstown, and Vandalia. She married Leonard Chatham in 1938, and they quickly had two sons. The family to St. Louis, MO in 1943, where Ruth was a true “Rosie the Riveter” inspecting the welds of auxiliary fuel tanks for military aircraft. During the 1940s and early 1950s, Ruth rode a Harley-Davidson motorcycle and became the first female member of the Missouri chapter of AMA (American Motorcycle Association). She married Delton Dees in 1964. Her professional career included managing S&H Green Stamp redemption centers and registering new brides at Famous-Barr, from which she retired in 1985. She moved “home” to Vandalia in 1992. She was an active member of First Baptist Church where she taught Sunday School to senior women. Over her long life she enjoyed many mission trips, general travel, and shopping. She was a member of First Baptist Church of Vandalia, Fayette County Hospital Auxiliary, G.E.M. Volunteer Program, and the Home Extension Association. She is survived by her sons, Gerald Chatham of Crystal Lake and Larry Chatham of Highland; daughter, Sherryl Chatham and husband Bob Huneke of Wildwood, MO; grandsons, Brian (Dawn) Chatham of Pleasanton, CA, and Craig (Kendra) Chatham of Crystal Lake; great grandchildren, Miles, Colin, Emerson, Elise, and Ashlyn Chatham; sister, Lorraine McKee of Gulfport, MS; and numerous nieces and nephews. She was preceded in death by her parents, husbands, daughter-in-law, two grandsons, four brothers, and one sister.

Opal &#8220;Ruth&#8221; Dees, 96, of Vandalia, IL passed away on Monday, December 23, 2019 at Fayette County Hospital Long Term Care. In accordance with the wishes of the family, cremation rites will take place and there will be no services... View Obituary & Service Information

The family of Opal Ruth Dees created this Life Tributes page to make it easy to share your memories.

Send flowers to the Dees family.