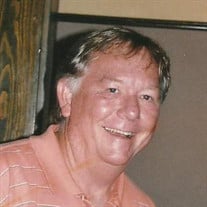 Paul Arthur Haas, 72, of Vandalia, IL passed away peacefully in his sleep on November 15, 2017 after a long courageous fight with cancer. A Funeral Mass will be held at 11:00 AM, Monday, November 20, 2017 at Mother of Dolors Catholic Church in Vandalia with Rev. Fr. Zachary Edgar officiating. Burial will follow in Mother of Dolors Catholic Cemetery, Vandalia. Military Rites accorded at graveside by Crawford-Hale American Legion Post # 95, Vandalia, IL & Brownstown VFW Post #9770. Visitation will be held from 10:00-11:00 AM, prior to the funeral mass at the church. In lieu of flowers, memorials may be made to Fayette County Cancer Fund, Mother of Dolors Catholic Church, or Vandalia's Little Community Garden, and will be accepted at Hohlt and File Funeral Home, PO BOX 146 Vandalia, IL 62471. Paul was born September 7, 1945 in Los Angeles, CA, the son of Lorraine “Ray” and Marcella (Harpstrite) Haas. He married Vickey Greer in 1965, they later divorced. He then married Carol Crow on November 9, 1990. Paul was a United States Army Veteran stationed in the Panama Canal Zone. He retired from the Texas Department of Transportation after 20 years in 2004. He loved gold mining, metal detecting, and spending winters with Carol and their many “Winter Texan” friends in South Texas. Paul was also a member of Mother of Dolors Catholic Church. He is survived by his wife, Carol Haas of Vandalia; daughter, Andrea Wittry and husband Chris of Mansfield, TX; step-son, Joshua Meyer of Belleville, IL; sister, Bonnie Overton and husband Dennis of Altamont, IL; brother, Ed Haas and wife Cindy of Laguna Vista, TX; grandsons, Andrew Wittry and wife Hope, Austin Wittry, and Christopher Wittry, all of Mansfield, TX; mother-in-law, Doris Crow of Ramsey, IL; and many nieces and nephews. He was preceded in death by his parents and a precious daughter, Toni Sue Haas.

Paul Arthur Haas, 72, of Vandalia, IL passed away peacefully in his sleep on November 15, 2017 after a long courageous fight with cancer. A Funeral Mass will be held at 11:00 AM, Monday, November 20, 2017 at Mother of Dolors Catholic Church... View Obituary & Service Information

The family of Paul Haas created this Life Tributes page to make it easy to share your memories.

Send flowers to the Haas family.