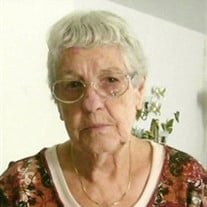 Mrs. Reabert Elder, 85, of Vandalia, IL passed away at 5:07am, January 18, 2013 at Fayette County Hospital. A graveside service will be held for Mrs. Elder at McInturff Cemetery, Hagarstown, IL on Monday, January 21, 2013 at 11:30 am with Rev. Doug Wodkta officiating.  A visitation will be held from 9-11 am, Monday morning at Hohlt & File Funeral Home prior to graveside service.  Memorials may be made to 2nd Chance Animal Rescue or VFW Post #3862 Vandalia. Mrs. Elder was born June 16, 1927, in rural Shobonier, IL, the daughter of William and Mary (Augustine) Diveley.  She married her best friend, Alva L. Elder, on January 31, 1946 in Vandalia, IL.  He preceded her in death October 12, 2012. She was a loving mother and homemaker and worked at the family produce stand. She is survived by her sons Harry Ellsworth of Pocahontas, IL, Eugene Elder of Vandalia, IL, Danny Elder of Lemont, IL, Randy Elder Vandalia, IL, Michael Elder Vandalia, IL; daughters Jeanene Lener of Plainfield, IL, Carmen Elder of Vandalia, IL; 16 grandchildren; 18 great grandchildren; 1 great-great grandchild. She was preceded in death by parents; husband; sons David and Stevie Elder; 4 brothers; and 5 sisters.

The family of Reabert Elder created this Life Tributes page to make it easy to share your memories.