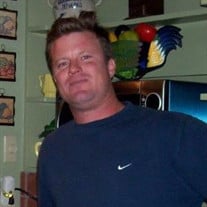 ****Graveside Services have been rescheduled for 2:00PM, Friday, February 4, 2022**** Richard Kemper “Kemp” Tinker, 51, of Pensacola, FL passed away unexpectedly on December 18, 2021. A Graveside Service will be held at 12:00PM, Friday, February 4, 2022 at Morton Cemetery, rural Vandalia with Rev. Doug Wodtka officiating. In lieu of flowers, memorials may be made to an organization of the donor’s choice. Online condolences can be expressed at www.hohltandfilefh.com. Mr. Tinker was born on May 21, 1970 in Bethesda Naval Hospital, MD, the son of Charles and Mitch (Murdock) Tinker. Kemp was a Navy “Brat” and along with his family, lived in California, Florida, Texas, and Washington, D.C. He graduated from McLean High School in McLean, VA. He was a gifted athlete and was the starting Quarterback for two years. He continued his education at Old Dominion University, a Division of the College of William & Mary. Eventually he transferred to West Florida University in Pensacola where he obtained a Bachelor of Science degree. Kemp was very much the outdoorsman and enjoyed hunting and fishing, especially on his family farm and was an avid Florida State sports fan. He owned and operated Cardinal Lawn and Landscape Service, in Pensacola. He is survived by his parents, Charles and Mitch Tinker; brother, Chris Tinker and wife, Colleen and nephews, Connor Tinker, Colin Tinker, and Charles Maurice Tinker. He was preceded in death by his brother, Charles Lee “Chuck” Tinker.

The family of Richard Kemper "Kemp" Tinker created this Life Tributes page to make it easy to share your memories.

****Graveside Services have been rescheduled for 2:00PM, Friday,...

Send flowers to the Tinker family.