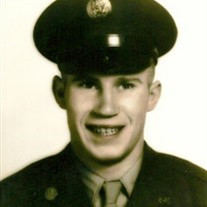 Richard F. Cohoon, 77, of Vandalia, went home to be with the Lord on Friday, August 23, 2013, at his home. Services were held at 11:00am, Tuesday, August 27 at the First Pentecostal Church in Vandalia, with Bishop Thomas Suey and Pastor Bill Kistler officiating.  Burial was in the Fairlawn Cemetery, Vandalia with military rites accorded by Crawford-Hale American Legion Post No. 95.  Visitation was held from 6-8:00 p.m. Monday and from 10-11:00 a.m. Tuesday at the First Pentecostal Church.  Hohlt & File Funeral Home was in charge of arrangements.  Memorials:  Christ Tabernacle Church Building Fund, Mid America Preparatory School, or donor's choice. Mr. Cohoon was born on February 1, 1936, in Fayette County, the son of James Benjamin and Hilda Lorraine (Wernle) Cohoon.  He married Linda Kay Diveley on October 21, 1959, in Vandalia. He was a pin setter for the Vandalia bowling alley and a caddie for the Vandalia Country and Golf Club during his youth.  He worked as a machine operator and a welder for Con-Rail for 32 years.  He was a member of Christ Tabernacle Church in Herrick, IL.  He was a veteran in the US Army - Korean War.  He was a lifetime member of the Veterans of Foreign Wars Post No. 3862 in Vandalia, and a lifetime member of Crawford-Hale American Legion Post No. 95 in Vandalia. He loved hunting and fishing with family and friends, and enjoyed working in his garden, especially sharing his prize tomatoes. He is survived by his loving wife, Linda, of 53 years; daughters Cynthia Dothager of Vandalia and Diana and her husband Gary Smith of Brownstown; three grandchildren Alicia and husband Ryan Ball of Grafton, Amber and her husband Zachary Crothers of Sullivan, Chelsea and her husband Emmanuel Garcia of Carol Stream; four great grandchildren Rosalie Ball, Grace Crothers, Wade Ball, and Zoey Crothers; brother Alfred Cohoon and wife Joyce of Greenville; sisters Joyce Brown of Bluff City and Maxine and husband Jim Mays of Greenville and sister-in-law Glenda Hamblin of Vandalia, who has been a faithful friend throughout the years. He was preceded in death by his parents; brothers Ernest and Albert; and sister Juanita.

Richard F. Cohoon, 77, of Vandalia, went home to be with the Lord on Friday, August 23, 2013, at his home. Services were held at 11:00am, Tuesday, August 27 at the First Pentecostal Church in Vandalia, with Bishop Thomas Suey and Pastor Bill... View Obituary & Service Information

The family of Richard Cohoon created this Life Tributes page to make it easy to share your memories.