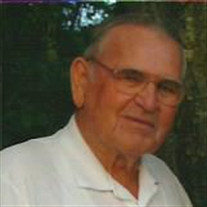 Robert Lee “Bob” Knebel, 84, of Mulberry Grove, IL passed away Wednesday, January 16, 2019 at Fayette County Hospital Long Term Care surrounded by his family. Bob was born on March 17, 1934 to Edwin and Edith Knebel in Pittsburg, IL. He was a graduate of Vandalia High School. He married Linda Arndt on July 12, 1958. A Celebration of Life Service will be held at 6:00pm, Sunday, January 27, 2019 at St. James Lutheran Church, 727 W. Gallatin Street in Vandalia. Visitation will be held from 4:00-6:00pm prior to services at the church. Bob will be laid to rest at Taylor Cemetery, Pittsburg, IL at a later date. Memorials may be made to St. James Lutheran Church. Bob was a U.S. Army veteran stationed in Texas and Colorado. Bob joined the Teamsters Union and began driving for Coca-Cola in Decatur, he then moved to Vandalia in 1967, where he began his career driving for Vandalia Transfer/Centralia Cartage. In addition, he was a lifelong farmer and well known for his love of tractors and raising cattle. Bob was a member of St. James Lutheran Church and served many years on the church council. He will be remembered for his many years of devotion for caring for his wife during her illness. A special thank you to the many caregivers and hospital staff for their loving care and support during his final days. The family wishes to extend a special thanks and gratitude to friends and neighbors who helped during the past months of Bob’s declining health and their appreciation to Bob and Linda’s nephew and niece, Jim and Dee Wiswell, for their countless hours of care and devotion. Bob is survived by his wife of 60 years, Linda Knebel, along with their three children: Richard and wife, Carla, Vandalia, IL; Steve and wife, Laurna, Mulberry Grove, IL; and Doug, Vandalia, IL. The Knebels have nine grandchildren: Keely Nelson, Travis Knebel, Cameron White, Brooke Renfrow, Ashley Knebel, Christopher Knebel, Will Knebel, Samuel Knebel, and Haydn Knebel. They have eleven great-grandchildren. Preceding him in death were his parents, an infant brother, and a grandson, Lucas Jacob Knebel.

The family of Robert Knebel created this Life Tributes page to make it easy to share your memories.

Send flowers to the Knebel family.