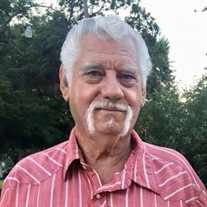 Robert Eugene “Bob” Pryor, 78, of Centralia, IL went to be with the Lord on Saturday, July 31, 2021 at SSM Health Good Samaritan Hospital in Mt. Vernon, IL, shortly after his family surrounded him with love; saying their goodbyes. A Celebration of Life Service will be held at 2:30 PM, Thursday, August 05, 2021 at Hohlt & File Funeral Home, Vandalia with Pastor Terry White officiating. Interment will follow in Farmers Cemetery, Shobonier. There will be a dinner held following the graveside service at the Patoka Civic Center, Patoka. Memorials may be made to the family. Online condolences can be expressed at www.hohltandfilefh.com. Mr. Pryor was born on January 07, 1943 in Vandalia, IL, the son of Kenneth “Fat” and Lena (Jackson) Pryor. He married the love of his life, Mariece Ann “Sparky” Eulberg on July 26, 1969. They would have celebrated 52 years of marriage this past week. Bob lost Sparky in 2017 to cancer, now they are rejoicing in Heaven where they are eternally together. Bob was known for being an amazing outdoorsman, a good ole country boy. He was happiest with a fishing pole in his hand or in a deer stand on a cold fall morning with his children and grandchildren being part of the hunt! He also had an amazing eye for morrell mushrooms, he would fill bags full. When asked, “Where did you find them?”, his reply, “On the ground.” So, in honor of Bob’s love for hunting and fishing the family asks that you wear camo or orange to his services. Robert was a man of great faith, one of God’s mighty warriors! He taught his family to never give up and keep pushing no matter what you face. His life was a true testimony of his faith. He attended New Beginning Ministries in Centralia. One of his greatest loves was his family and his little dogs, Precious and Jako. He was happiest when he cooked for his family; known for his fish, mushrooms, meatloaf, spaghetti, and chicken noodles. He found great joy with his family around the table; sharing stories of he and Mariece’s life, days of fishing and hunting and how important it was to learn to live off the land. He loved to make everyone laugh and lived life to the fullest. He instilled great morals and work ethic into his family; he was a hardworking and dedicated family man that will be greatly missed. Robert “Bob” Pryor was employed by Norfolk and Western Railway for many years. He also worked at Leo Brown Lumber in Vandalia, worked seasonally in the fields, was a small engine mechanic, and ran an auction barn in Shobonier with his wife, Sparky. There were many great friends and memories made at Pryor’s Auction Barn. Robert is survived by his three daughters from his first marriage, Tamera Lynn Pryor of Nokomis, Chery Ann Pryor Martz of Nokomis, and Cathy Sue “Pud” Pryor Standefer of Vandalia; his three children with his wife, Sparky, daughter, Montell “Telly” and husband Dustin Fields, son, Kendall Pryor and wife Danielle, and daughter, Sarey and husband Randle Giller, all of Centralia; son-in-law, Harold E. Alexander II of Centralia; brother, Darrell Pryor of Vandalia; and sisters, Jean Torbeck of Odin, Carolyn and husband Jerry Torbeck of Vandalia, and Shirley and husband Robert Flannigan of Decatur; many nieces and nephews. Their legacy carries on through their 19 grandchildren; 7 great grandchildren- soon to be 9, with two new granddaughters on the way. We will not say goodbye, until we meet again, for our hope is knowing we will be together again one day. Robert was preceded in death by his father, Kenneth “Fat” Pryor; mother, Lena Pryor; wife, Mariece “Sparky” Pryor; brothers, Dean Pryor and wife Mary and Charlie Pryor; sisters, Ruth and husband Harold Bowen and Patty and husband Junior Lash; and brother-in-law, Marvin “Pops” Torbeck. The family would like to thank Dr. Shroff for all of the dedicated years of service. You were not just his Dr., but his friend.

Robert Eugene &#8220;Bob&#8221; Pryor, 78, of Centralia, IL went to be with the Lord on Saturday, July 31, 2021 at SSM Health Good Samaritan Hospital in Mt. Vernon, IL, shortly after his family surrounded him with love; saying their goodbyes. A... View Obituary & Service Information

The family of Robert "Bob" Pryor created this Life Tributes page to make it easy to share your memories.

Send flowers to the Pryor family.