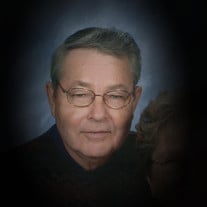 Ronald Judge Robinson, 88, of Vandalia, IL passed away at 6:42 PM, Thursday, August 01, 2019 at Fayette County Hospital Long Term Care. A Funeral Service will be held at 11:00 AM, Wednesday, August 07, 2019 at the First Christian Church of Vandalia with Rev. Robert Francisco officiating. Interment will follow at Fairlawn Cemetery, Vandalia. Military Rites will be accorded at the graveside by Crawford-Hale American Legion Post # 95, Vandalia & Brownstown VFW Post #9770. Visitation will be held prior to services from 9:00-11:00 AM, Wednesday, August 07, 2019 at the church. Memorials may be made to Fayette County Hospital LTC or to Habitat for Humanity. Ronald Judge Robinson was born on October 20, 1930 in Grayville, IL, the son of Claude and Anna Marie (Judge) Robinson. He married Mary Louise Siebert on May 31, 1958 in Poseyville, IN; she preceded him in death on January 07, 2018. After graduating high school, Ron served in the United States Navy. He then received his Master’s Degree in education from Vanderbilt University. Ron started his teaching career in Sumner High School before teaching at Vandalia Community High School for 34 years; where he was also the athletic director and coached all sports. Ron served as the chairman for the Board of Zoning Assessments; was on the Senior Citizens board; and enjoyed volunteering for the local Habitat for Humanity. He was a member of the First Christian Church of Vandalia; Crawford- Hale American Legion Post #95, where he was previously the Chaplain; and Vandalia V.F.W. Post # 3862. He is survived by his three sons, Paul Robinson of Indian Trail, NC, Brian Robinson and wife Kathie of St. Louis, MO, and John Robinson and wife Alisa of Frisco, TX; and grandchildren, Brianna Hales, Annie Robinson, James Robinson, Scott Robinson, and Benjamin Robinson. He was preceded in death by his parents; wife; and brothers, Marvin Robinson and Charles Robinson.

Ronald Judge Robinson, 88, of Vandalia, IL passed away at 6:42 PM, Thursday, August 01, 2019 at Fayette County Hospital Long Term Care. A Funeral Service will be held at 11:00 AM, Wednesday, August 07, 2019 at the First Christian Church of... View Obituary & Service Information

The family of Ronald Judge Robinson created this Life Tributes page to make it easy to share your memories.

Send flowers to the Robinson family.