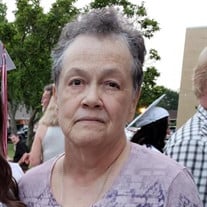 Shelley Beth “Mam” Berry, 65, of Vandalia, IL passed away at 10:50 PM, Monday, February 15, 2021 at Altamont Lutheran Care Center. Per Mam’s wishes, cremation rites will be accorded and there will be no services held at this time. Memorials may be made to the donor’s choice. Shelley Beth Thompson was born on July 29, 1955 in Vandalia, IL, the daughter of Donald Lavaughn and Beth LaVonne (Gallup) Thompson. She married Robert Lee Berry on October 16, 1992; together they celebrated 28 years of marriage. In her younger years, Shelley worked at various factories. She then became a homemaker; caring for her two daughters and several grandchildren that came along the way. Mam loved her grandchildren; they were her world. She did anything and everything she could for them. Mam is survived by her husband, Robert “Bob” Berry, daughter, Tracy and husband Jerry Evans and daughter, Carrie and husband Brice Summers, all of Vandalia; grandchildren, Lacey Merrill, Gauge Jarett, Katlyn Evans, Justin Evans, Chase Evans, Dawsyn Evans, Jesse Evans, Colton Evans, Cheyenne Summers, Shelbe Summers, and Cameron Summers; and great-grandchildren, Lilliana Merrill, Aubree Merrill, Bailee Merrill, Makyla Merrill, Gabbriella Merrill, Britton Merrill, Lucca Bridges-Burkett, Jadalyn Tedrick, Rory Tedrick, Remington Evans, Mason Evans, Sawyer Evans, and Paisley Summers. She was preceded in death by her parents and grandson, Britton Merrill.

The family of Shelley "Mam" Berry created this Life Tributes page to make it easy to share your memories.

Send flowers to the Berry family.