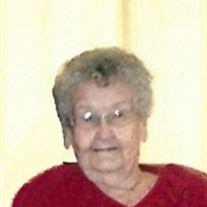 Syble Irene King, 94, of Odin, IL formerly of Brownstown, IL passed away on May 23, 2013 at St. Mary's Good Samaritan Hospital, Centralia, IL. Services for Mrs. King will be held at 2:00pm, Monday, May 27, 2013 at Hohlt & File Funeral Home, Vandalia, IL with Rev. Bob Carter officiating.  Burial will follow in Griffith Cemetery, Brownstown, IL.  A visitation will be held from noon until time of service Monday, May 27, 2013 at Hohlt & File Funeral Home, Vandalia, IL.  Memorials may be made to the donor's choice. Syble was born on March 21, 1919, in Millington, TN, the daughter of Mr. and Mrs. Jake and Nora Lambert.  She married Elvin King on August 16, 1940 in Salem, TN.  She was a homemaker and affiliated with Temple Baptist Church. She is survived by her two sons Billy King of Alma, IL and James King and his wife Linda of Hamlet, IN and several grandchildren and great grandchildren.

The family of Syble King created this Life Tributes page to make it easy to share your memories.