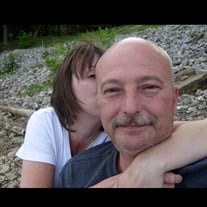 Christopher Todd Buckley, 57, of Avon, IN passed away on Thursday, February 13, 2020 at IU Health West Hospital in Avon, IN. A Funeral Service will be held at 2:00 PM, Tuesday, February 18, 2020 at Hohlt and File Funeral Home, Vandalia, IL. Interment will follow in McInturff Cemetery, Vandalia, IL. Visitation will be held prior to the service from 12:00-2:00 PM, Tuesday, February 18, 2020 at the funeral home. There will be a gathering for friends and family at Overcup Baptist Church after internment. Memorial donations may be made to Eagle Creek Park Foundation, Inc. Ornithology Center https://donatenow.networkforgood.org/Inmemoriam (Please specify that the donation is for the Ornithology Center in the proper drop-down box.) Todd Buckley was born on October 29, 1962 in Carbondale, IL, the son of Terry Gene and Gwendolyn Ann (Hopkins) Buckley. He first married in 1984 to Rita Anne Medley with whom he had his son, Christopher Daniel Buckley. He married Kathleen Diane Perkins on October 27, 2005; together, they raised five fur babies and shared 14 years of marriage. From 1990-98 Todd co-owned and operated two water treatment businesses with his father. For 21 years following, Todd served as the self-designated ‘accidental water treatment guy’ at Aqua Systems of Avon. Having received several national certifications (Water Quality Association Master Water Specialist CWS VI and American Wastewater Association Certified Operator), he demonstrated his ability to not only be a professional in the industry but excel in doing so. Todd loved the outdoors and was happiest while at home in Owen County or driving through the nearby woods spotting bald eagles. He had an avid love for music and enjoyed both playing it in many forms and recording it with some of his closest, and oldest, friends. Todd could extinguish fires with his humor and led a life of humility always putting others before himself. He lived life neither rashly nor timidly, a maxim he instilled in all those he surrounded himself with. He is survived by his wife, Kathleen Perkins of Avon; son, Christopher (Dan) Buckley of Detroit, MI; sister, Christina and husband, Rick Irby of FL; and his former spouse, Rita Medley of Leroy, IL; aunt and uncle, Connie and Jerry Brown of West Lafayette, IN. He was preceded in death by his parents.

Christopher Todd Buckley, 57, of Avon, IN passed away on Thursday, February 13, 2020 at IU Health West Hospital in Avon, IN. A Funeral Service will be held at 2:00 PM, Tuesday, February 18, 2020 at Hohlt and File Funeral Home, Vandalia, IL.... View Obituary & Service Information

The family of Todd Buckley created this Life Tributes page to make it easy to share your memories.

Christopher Todd Buckley, 57, of Avon, IN passed away on Thursday,...

Send flowers to the Buckley family.