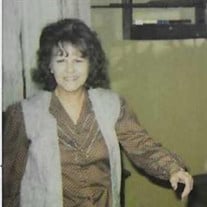 Vivian M. Sarchet, 78, of Vandalia, IL passed away at 4:10 AM, Friday, September 03, 2021 at SBL Fayette County Hospital. Per Vivian’s wishes, cremation rites will be accorded. There will be no services held at this time. Interment will take place in Pilcher Cemetery, Brownstown, at a later date. In lieu of flowers, memorials may be made to an organization of the donor’s choosing. Online condolences can be expressed at www.hohltandfilefh.com Vivian Maxine Sarchet was born on September 16, 1942 in Salem, IL, the daughter of Fred and Fern (Horton) Kirgan. She married Wilber John Sarchet in March of 1973. Together, they celebrated 28 years of marriage before his passing on September 14, 2001. Vivian was a packing specialist employed by Brockway for several years. She enjoyed crocheting, cooking, and spending time with her friends and family. She was a member of the First United Methodist Church of Vandalia. Mrs. Sarchet is survived by her son, Steve Sarchet and wife Krissie of Vandalia; step-sons, Randy and wife Diane of Mulberry Grove, Butch Sarchet, and John Sarchet; step-daughter, Loretta Meuhlberg of Vandalia; grandchildren, John Sarchet, James Sarchet, Delano Sarchet, Brandy McCormick, Kallye Gathe, Dylan Durr, Macye Sarchet, LaCole Gathe, and Brittany Gathe; and several great-grandchildren. She was preceded in death by her parents; husband; son, Paul Gathe Jr. who passed on July 04, 2004; brothers, Kenny Kirgan and Carl Kirgan; and sisters, Geraldine Maschoff and Evelyn Corine Talbott.

Vivian M. Sarchet, 78, of Vandalia, IL passed away at 4:10 AM, Friday, September 03, 2021 at SBL Fayette County Hospital. Per Vivian&#8217;s wishes, cremation rites will be accorded. There will be no services held at this time. Interment will... View Obituary & Service Information

The family of Vivian M. Sarchet created this Life Tributes page to make it easy to share your memories.

Send flowers to the Sarchet family.