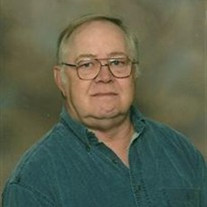 William Joseph "Bill" Rickman, 62, of Vandalia, died on Tuesday, Jan. 10, 2012, at his home. Graveside services will be held at 2 p.m. on Friday at Fairlawn Cemetery in Vandalia, with the Rev. Joe Lawson officiating. There is no visitation.... View Obituary & Service Information

The family of William "Bill" Rickman created this Life Tributes page to make it easy to share your memories.