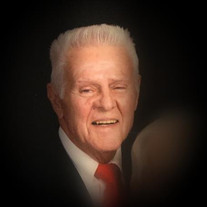 William Reynolds “Bill” Oger, 83, of Vandalia, IL, passed away at 12:45 AM, Sunday, May 05, 2019 at Treasure Health in Stuart, FL. A Graveside Service and Interment will be held at 10:00 AM, Saturday, May 18, 2019 at Green Hill Cemetery, Van Burensburg with Rev. Fr. Scott Snyder officiating. Memorials may be made to the American Lung Association or to Mother of Dolors Catholic Church. William Reynolds Oger was born on February 12, 1936 in Springfield, IL, the son of the late Herman John and Anna (Reynolds) Oger. Bill was a Veteran serving in the United States Marine Corps. He married Marilyn Eileen Anderson on December 24, 1958 in Springfield; she preceded in death on November 16, 2015. Bill was a retired correctional officer from the Illinois Department of Corrections; prior to working for IDOC, Bill enjoyed working at his father’s shoe store. Bill was a member of the Vandalia Moose Lodge #1447. He is survived by his son, Tony William Oger of Vandalia; daughter, Kimberly Anna and husband Mike Mars of Vandalia; grandchildren, Braxton Denton and wife, Carolyn of Wilmington, NC; Coda Denton of Denver, CO; John Mars and wife Kelsey of Vandalia; Seth Mars and wife Claralyn of Brownstown; and Jordan Mars of Amarillo, TX ; and great-grandchildren, Aiden, Alayna, Amelia, Jack, Oliver, Archer, and Immaculate. He was preceded in death by his parents, wife, brothers, and sisters.

The family of William R. Oger created this Life Tributes page to make it easy to share your memories.

Send flowers to the Oger family.