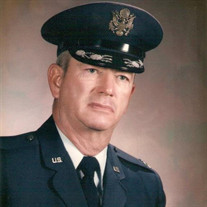 William "Bill" Paul Schultz, 92, of Vandalia, Illinois passed away peacefully at 5:48 AM, Friday, January 01, 2021 at SBL Fayette County Hospital with his daughter, Kathy, at his side. Mr. Schultz was born on May 21, 1928 in Bowling Green, Kentucky, the son of Robert Vernon and LaNeva Emma (Speck) Schultz, Sr. He married Emma Mae Martin on September 04, 1955. Together they raised two daughters and celebrated 55 years of marriage before her passing on February 16, 2011. William obtained his degree in education in 1951 at Western Kentucky State College prior to enlisting in the United States Navy during the Korean Conflict. After his Navy service, he served as a member of the United States Air Force Reserve, eventually becoming a liaison for the Air Force Academy in Colorado Springs, Colorado. Upon retiring in 1988, he had achieved the rank of Full-Bird Colonel. Bill's career as an educator began when he settled in Vandalia in 1953 to teach at Vandalia Junior High School. In addition to teaching math, he coached basketball, track and field, and intramural football. "Coach Schultz" furthered his education by earning a Master’s Degree in administration, eventually becoming principal for VJHS. After 32 years of teaching, coaching, and leadership, he 'retired' in 1985 to run Schultz Orchard in Shobonier, Illinois. He enjoyed selling apples, peaches, and apple cider for nearly two decades to area locals and many others who traveled from out of state. In his spare time, and after he sold the orchard, he enjoyed buying, rebuilding, and restoring MG and Triumph sports cars. Bill is survived by his daughters, Vonnie (Yvonne) and husband Mark Albrecht of Tucson, Arizona, and Kathy Schultz of Vandalia; and numerous nieces and nephews. He was preceded in death by his parents; wife; brother, Robert Vernon Schultz, Jr.; sister, Geraldine Dorothy Purcell; and nephew, Robert Foster Purcell. Services will be held at a later date with interment at Fairlawn Cemetery, Vandalia. Memorials may be made to Nourishing Greatness, Fayette County Health Department, or a charity of choice.

William "Bill" Paul Schultz, 92, of Vandalia, Illinois passed away peacefully at 5:48 AM, Friday, January 01, 2021 at SBL Fayette County Hospital with his daughter, Kathy, at his side. Mr. Schultz was born on May 21, 1928 in Bowling Green,... View Obituary & Service Information

The family of William P Schultz created this Life Tributes page to make it easy to share your memories.

Send flowers to the Schultz family.